As part of the Great Escape festival, be cerebrally battered by a pair of the UK’s finest in math/noise-rock – melodies also included.
Concorde2’s Saturday headliners as part of Brighton’s new music festival just couldn’t be isolated to one band – instead, both of the supreme acts on Bristol’s Blood & Biscuits label band together for a double team show of unbeatably intricate, energetic guitar music. It helps that it’s also one of the only shows of the weekend with tickets left!

Three Trapped Tigers, hailing from London, live up to their name – a trio of hyper-dextruous musicians that hurl their pent-up musical energy around in unfathomable webs of complexity. Adam Betts’ furious drumming (perfecting every beat from speed-metal rolls to glitchy electronic fills) intertwine with Matt Calvert’s alien, effects-board-driven guitar dives and Tom Rogerson’s lightning keyboard phrases, making up a wholly frenetic – but impossibly contained – mess of sound. At the same time impossible to keep up with and hyper-visceral, they manage to incomprehensibly weave math rock with IDM-glitch, and still conjure up infectious melodic hooks to propel the whole thing forward. Whether you’re a fan of Foals, Battles, Aphex Twin or basically anything fast and loud, you’ll be torn apart (in a good way) by these tigers. 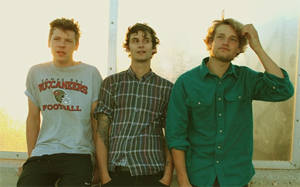 Labelmates Tall Ships, hailing partly from Brighton itself, take elements of the shimmering intricacy of TTT, but keep their feet more firmly on the ground. Far more comparable to Foals, their sound adheres dutifully to the power of the rock song – riffs win over musicianship here, and here be vocals also! Rich Phethean’s lyrically cerebral but winningly melodic pipes hold together a far more minimal instrumentalism, thanks to an effortless restraint from the touring four-piece, binding tight guitar lines and tighter rhythms with vocal harmonies and keyboard motifs. It’s pop on a circuit-board, and equally as energising.
Support also comes from third labelmate The Physics House Band – a house band even more in the sense of also stemming from Brighton’s shores. They also deal in hyper-intricate rock-by-numbers (if the numbers were phD level algorithms), and will kick off a night with more notes than Sussex and Brighton uni’s revising students put together. Entry requirements, C in GCSE maths.
Doors 19:30, Close 22:00, 14+, £8.50 + BF or FREE WITH A FESTIVAL WRISTBAND
See concorde2.co.uk for more information and to buy tickets.