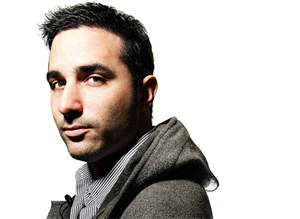 This Yoda, a powerful force, has he.
Oh. Hold on. I think I may have the wrong bloke.
If I could just check Wikipedia for a second, and. . . . ah. . . . yes. . . . ok, bear with me a moment, please.
Right then.
This ‘DJ’ Yoda, an impressive night planned at Concorde 2, has he.
Yes, he’s back once again, it’s the turntable master, the erstwhile Duncan Beiny, returning to Brighton after a year long absence and bringing his highly acclaimed audio-visual show along with him.
For anyone unfamiliar with the magpie-minded DJ’s ever eclectic (and electronic) oeuvre , then this upcoming performance, featuring support from the always dependable A-Skillz and Krafty Kuts, will provide a great chance to get better acquainted with an artist Q magazine once declared as being ‘one of the 10 DJ’s to see before you die’. So unless Sir Terry Wogan’s started working at your local hospice, I suggest you get yourselves down the Concorde pretty sharpish.
In actual fact, the Q endorsement is just one of the many accolades Yoda has received over the course of a career that has taken him from the student union of Warwick University to the somewhat more salubrious surroundings of BBC’s Broadcasting House. Along the way, performances alongside the likes of Amy Winehouse, Mark Ronson, Fatboy Slim and Lily Allen have seen the London-based turntablist’s star value rise considerably, although one feels the tag ‘superstar DJ’ does not sit as comfortably on his shoulders as it does with some of his contemporaries, (not pointing any fingers, David Guetta).
But whilst others may appear more interested in revelling in the celebrity status such employment opportunities allow, for Beiny and his alter ego, one gets the sense that the real motivation behind his enduring success is not so much love of himself, rather it’s his bona fide love of music that keeps things moving. This love should quickly becomes apparent to anyone hearing the array of loops and samples that make up Yoda’s back catalogue, his inventive enthusiasm and sponge-like ability to soak up pop cultural references from the most obscure of sources,  conspire perfectly to make these audio-visual nights an unmissable event. So, unless you live in a galaxy far, far away (like Eastbourne maybe) you’ve no excuse not to be taking in the wisdom of Yoda’s cut and paste magic at the Concorde this weekend.
Starting at 11:pm, £12 in advance
For more information and tickets, visit djyoda.co.uk
Follow him on Facebook at facebook.com/djyoda
Words Ed Kirby
http://www.youtube.com/watch?v=uztBMYkZa6c