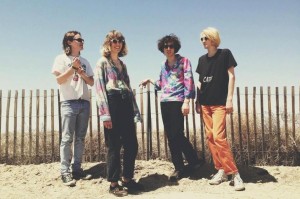 Making waves again in our B-town, Birmingham baggy revivalists Swim Deep are treating us to a welcome return this September. Concorde 2 will see the charity shop chic quartet pay the seaside city their first visit since career defining performances at The Great Escape earlier this year.
After a busy summer of festivals across the UK and Europe, including the prestigious Glastonbury, Reading and Leeds, Swim Deep are finally getting round to showcasing their newly released album “Where The Heaven Are We”, in more intimate surroundings. And what a showcase it should be in light of their top10 chart success and compelling live act.
Reeling in Birmingham’s current 90s revival along side better known Peace, as well as Jaws and Splashh, Swim Deep personate The Stone Roses with Primal Scream’s dreamier moments and a dash of MGMT feel good.
Standout singles “King City” and “The Sea” have been drawing attention in all forms including an unfavourable nod from reality TV show “Made In Chelsea”. But don’t let that hinder the band’s potential. Their mix of heavy synths, shoe gaze and raucous 90s grunge is performed with little pretense, and the authentic aura’s promise to transport you to an entrancing, sun kissed daydream. Becoming one of 2013’s most talked about live acts, make sure you catch them now before Arenas take possession of them.
7pm- 23.00, tickets £10 in adv+ bf. Age 14+
Follow the band  at swim-deep.tumblr.com
and facebook.com/SWIMDEEPUK
www.concorde2.co.uk
Words by Amber Ainsworth