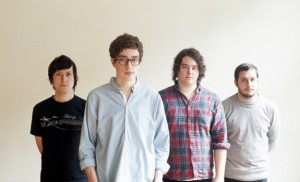 The Canadian four-piece return to a Brighton stage like fish to water with their jangling hotchpotch of yelping tunes.
Born Ruffians are part of the mismatched indie pocket of Warp Records’ signings who are otherwise famous for their progressive electronic music. Unlike their fellow Warp guitar bands though (Grizzly Bear, Battles), Born Ruffians stray far not just from classic Warp instrumentation but from Warp in almost every other facet possible – neither do they possess the creepiness of Aphex Twin, nor the elaborate stylings of Squarepusher or Flying Lotus. This is probably best understood by listening to their cover of Aphex Twin’s ‘Milkman’ and ‘To Cure A Weakling Child’ for the label’s anniversary compilation. All it takes from those records’ eerie perversion is a kind of joyfully letchy slapstick, chanting ‘I would like some milk from the milkman’s wife’s tits’ and TCAWC’s childish trills in ecstatic rounds, like some kind of twisted campfire song.
That said, twisted only applies to that song because it takes something already twisted and flips it sunny side up, simplifying its elaborate composition into a jangling mess of guitars and baby-vocals. It’s frontman Luke Lalonde’s chirping vocals and the band’s ramshackle clean guitars and sloppy drums that better define Born Ruffians’ sound. And if it sounds like melody and simplicity are chosen over tight musicianship, it’s probably more the case that the lack of effort with accuracy defines and refines the unbridled joy of their music. Like kids too excited about playing music to bother with playing it right, the shambolic energy of songs such as 2007’s ‘Hummingbird’ (that the band played in a cameo on Skins) wins over hearts and ears with its pent-up and unleashed rapture.
Three albums into their career, Born Ruffians’ show at Green Door Store will no doubt delight as strongly as their last appearance, with a set of new, bolshy tunes to add to a roster that already includes the superlatively jubilant ‘I Need A Life’ and cooing bedside love song ‘Little Garçon’. Shake it all out and forget your physical compsure for one night only – then you’ll be something closer to the winning formula of Born Ruffians.
£6.60-7.25 adv or £6 on the door, 18+, 7pm.
Head to seetickets to buy tickets, also available from Resident Records.
thegreendoorstore.co.uk
Words by Callum McLean