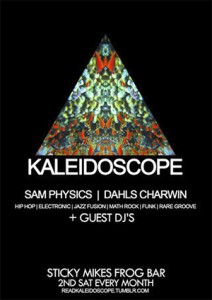 If you’ve not had enough psychedelic visuals this month (Lux at The Green Door Store, September 12), then your next stop on the tour must surely be Sticky Mike’s for The Physics House Band’s monthly night, Kaleidoscope. Expect more of the same trippy projections and musical accompaniment….basically a normal Physics House Band gig but all night long. What could be better?
Promising a little something for everyone from Santana to math rock, and De La Soul to jazz fusion. Local upstart, Sam Physic and spoonerifically-monikered Dahls Charwin will be spinning rare grooves all night.
Don’t expect to do much dancing unless you can jive to 7/8 time signatures though.
9pm-3.30pm, September 14, Sticky Mikes Frog Bar, £Free
For more info visit readkaleidoscope.tumblr.com