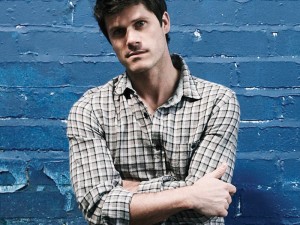 Devon’s golden crossover folkie and Mercury nominee Seth Lakeman prepares to warm up St George’s stage floor with his fiddle-heavy boshers and traditional balladeering: think Mumford rolled into one man, with poignant tales of West Country past to boot (stomp).
In many ways responsible for the late noughties folk revival, Seth Lakeman rose to prominence by collaborating with contemporaries Cara Dillon and Kate Rusby, but his own intriguingly evocative tales of old Devon working men and English civil war became ever more popular thanks to an added dose of urgent violin melodies, propelled by a thumping backbeat. Folk with a contemporary, borderline MOR twist, the formula became a recipe for success with world-conquering, cider-supping, hay bale-shagging twits Mumford & Sons – but Lakeman not only did it first, he does it better. Two counts prove his vast superiority: genuinely passionate love for his native Dartmoor and England’s rich folk past, and a damn-near superlative talent on various instruments, including tenor guitar and fiddle – which he somehow manages to tear up and down like an electric guitar while singing rather nicely at the same time. It’s no surprise that this won him a nomination for a Mercury Prize in 2005 and a top 10 album in 2008.
Which isn’t to say the man’s run out of steam. If anything, the folky gusto of his mid-career reached absolute tipping point with 2010’s “Hearts & Minds”, after which his 2011 follow-up looked to more contemplative terrain, to general critical approval. With a seventh solo album on the way, Lakeman continues to tour small venues and theatres – ever the lover of the small, despite his crossover appeal. Backed by his full band, as well as special guest Lisbee Stainton and support from folk duo Winter Mountain, his show at St George’s Church will undoubtedly cover the vast scope of his musical background with the maturity that comes with as long and fruitful a career as Lakeman’s. No tweed necessary.
Starting at 7pm, £20.90 in advance. Aged 14+.
Head to sethlakeman.co.uk for more info and to buy tickets, also available from Resident Records.
Words by Callum McLean