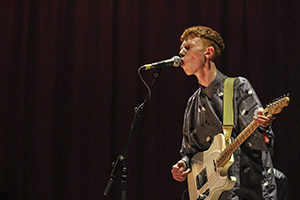 Archy Marshall is a rawboned, pale skinned 19 year old, with a face worthy of comparison to Ron Weasley and the kind of steely glare you might expect from a guy about to knock your teeth in.
In spite of his surly demeanour and awkward frame, the songwriter has carved a well earned reputation throughout London as a bewilderingly powerful and morose singer. His vocals are callow and bloody and painfully expose bare-faced narratives of the singer’s familiarity with rejection and heart break. Predominantly known under his alias of King Krule, yet previously acknowledged in former recordings as Zoo Kid, DJ JD Sports and Edgar The Beatmaker, his long anticipated EP was released in November 2011 on True Panther Records.
His full-length debut album “6 Feet Beneath the Moon” was released on XL Recordings/ True Panther Sounds earlier this summer, allowing a grizzly insight into the surreptitious details of Krule’s past through perceptive personal anecdotes and a gut wrenching confession of his spurned former self. Stylistically, Krule staggers between traditional 50’s soul and crueler, harsher baritones. Set to play The Haunt this October, Krule is definitely worth the listen.
Words by Amy Louise Banks
Starting at 7pm, £9 advance. Aged 14+.
For more information and tickets visit: seetickets.com/event/king-krule/