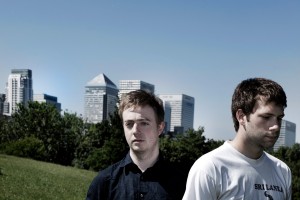 Post-dubstep pioneers (and one-half Brightoners) Mount Kimbie take to Concorde2 with their trademark cluttered glitch-pop – now with live vocals and brass!
In the few years between their formation in 2008 and the release of their now canonical 2010 debut Crooks And Lovers, Kai Kampos and Dom Maker (AKA Mount Kimbie) became almost entirely responsible for putting the post- in post-dubstep. Though they claimed to have been consciously imitating the sounds of South London – where they met at South Bank University – they instead created a new breed of electronic music from its dubstep ashes: gone was the sub bass and macho stagger, replaced by a high end scattering of crisp percussion, wispy guitars and warped found sounds. It’s no coincidence that the pair were chums with fellow South London post-dubstepper James Blake, who appeared live with them at various points and contributed remixes to their already instantaneously acclaimed first few releases. Both acts acquainted dubstep with acoustic instruments and indie rock, and on their latest Cold Spring Fault Less Youth, Mount Kimbie join Blake in making bona fide songs out of dubstep’s increasingly diverse after-story. (Near unanimous) praise for the album calls it both more ambitious but easier on the ears, welcoming its inclusion of vocal performances from both eclectic singer-songwriter King Krule and the duo themselves.
Besides granting Mount Kimbie a fresh set of intriguing numbers to their live set, it also expands it into a full band performance. Rather than melding their back catalogue into a flowing set, they perform as a rock act – constructing their varied and elaborate compositions as distinct songs. Helped by a live saxophonist, trombonist and drummer, the duo belie the often limply executed traditions of live electronic music (blokes staring at laptops), carving their idiosyncratic sounds from the meditative, sometimes jazzy, to groove-inspiring boshers. It’ll be an exercise in crossover electronic music to have Concorde2 captivated – where else can you alternately chin-stroke and shuffle to post-dubstep’s greats this winter?
Doors 7.30-11pm, £10 advance plus booking fee, Aged 14+
Head to concorde2.co.uk for more info and to buy tickets, also available from Resident Records. For more info about the duo, check out their website, and stream ‘Blood and Form’ from their new album at The Guardian
Words by Callum McLean