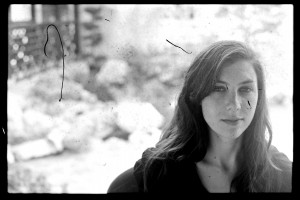 At the hat trick peak of her recording career, avant-popster Julia Holter brings her beguiling mystery to Komedia’s cabaret interior, borne on the back of her crystal hush and a delicate string and brass band.
In her modest three years as a recording artist, LA singer-songwriter Julia Holter has recorded as many albums – not a groundbreaking proposition, despite its rarity in the ’00s, until you hear any one of the masterfully complex compositions that make them up. Pitchfork bait supreme (every album, incredibly rarely, earning above 8.0 and two ‘Best New Music’ badges), Holter does resonate with all the right intellectualisms for the distinguished/pretentious muso, borrowing from musical (and literary) modernism, jazz and her own fascinating imagination. But rather than being reduced to the opaque and highbrow, each album has remained wholly listenable despite its complexity. This hit its peak with this summer’s Loud City Song, which swept the critical board (including XYZ’s own – read our review here with its majestic spread of spine-chilling, earth-shakingly beautiful pieces, ranging from the world-in-a-teacup delicacy of opener ‘World’, through the tear-inducing swells of ‘Maxim’s I’ and brass-thumping ‘This Is A True Heart’. Despite being written about an imagined Paris dreamworld, the album’s metropolis shimmered with the mystery of Holter’s native L.A. as if seen through a David Lynch, surreal neo-noir lens – but as with her music as a whole, don’t let this put you off. Beneath all the big words, it’s just chock full of stirring, wonderful sounds.
The chief wonderful sound in question is, of course, Holter’s voice. Though strings, brass and echo form in many ways the main structure of her latest work, it’s unquestionably her own breathy, crystal clear tones that always pierce through the murk. Live, it is as unfaltering as her impeccable band (saxophone, cello, violin and drums), but with the added air of intrigue that come with Holter’s performance – sugary but eerie, just like the creepy performances of Lynchian crooners (a la Julee Cruise). Only when you see Holter from among Komedia’s suitably cabaret seating, you know that there are no Twin Peaks giants and murderers or Blue Velvet psychopaths waiting in store – just a swiftly burgeoning back catalogue of increasingly powerful songs from one of the most consistently original songwriters around.
Doors at 7.30pm, £13 plus booking fee, Aged 14+.
Head to komedia.co.uk/brighton for more info and to buy tickets, also available from Resident Records. For more info about Holter, check out her website.
Words by Callum McLean