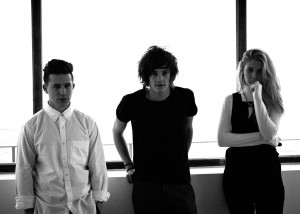 Since meeting at Nottingham University in 2009, London Grammar have exploded onto the indie scene with their arching pop melodies, brooding musicality and powerful vocals delivered by vocalist/lyricist Hannah Reid, that have attracted parallels with Florence Welch.

Reid is joined by Dan Rothman on guitar and Juse Tzuke (drums, djembe and keys). Following the release of their debut album “If You Wait” (September 2013, Metal & Dust Recordings), and a trio of singles/EPs from the album earlier this year, London Grammar now embark on their first world tour, with a stop off at Brighton’s own Concorde 2.

The sell out show – relocated from the Haunt due to over-capacity demand – sees Fryars and Jaymes Young in support. Expect a haunting and atmospheric evening of melodic and emotively potent electro-pop.