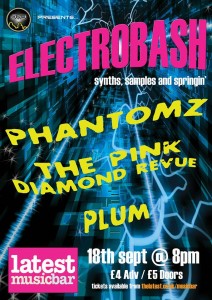 Controversial statement alert: Brighton just doesn’t have enough psychedelic punk electro-clash nights. Just throwing it out there.
Well fear no more good Brighton folk. Local independent label Overhead Wires has put together a crack-a-lacking line up of disco punk, psyche-sampling and leftfield Scottish pop. Sound appealing? Like a fish supper on a Friday does!
Headlining are the Manc Goldfrapp impersonators Phantomz, who look as good as they sound (think white platform shoes and pony tails, and that’s just the bassist). Keeping them company are über cool The Pink Diamond Revue. Apart from having the best band name, they also have the best samples, which form a major part of their tripped out set. Finally, it’s solo performer Plum, who gives the night a seal of quality with a “Best Electronic Act” award from the Scottish Music Awards 2013.
What makes this night even more unique (apart from it being the only psychedelic electroclash night in Brighton), is that there are three acts and only five members between them. Makes The Polyphonic Spree seem a bit stupid now doesn’t it?
Words by JDF
8pm, September 18, The Latest Music Bar, £4 Adv 18+
For more info visit thelatest.co.uk/musicbar
overheadwiresmusic.com