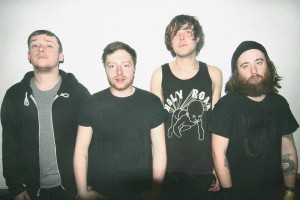 2012 was the last time Bastions brought their atmospheric hardcore to the shores of Brighton. Since then they have released “Bedfellows Part 1: The Bastard Son”, the first of a two part release and a clear step up from the already impressive debut full-length that was “Hospital Corners”. Grossly underrated, but adored by many, Bastions are an absolute gem to the UK hardcore scene and never fail to deliver an intense, heartfelt live performance.
Joining them are the equally abrasive Grappler who released their EP “I’m Everything I’ve Ever Feared” earlier this year, a harrowingly dark slab of progressive hardcore. As if that wasn’t enough, the brilliant Black Shapes will be making an appearance ahead of the release of their debut album “Sleep, Sleep, Sleep”. Expect more diversity and even bigger riffs than the band displayed on last year’s “In The Mourning Light” EP.
Brighton’s own We Never Learned To Live are also supporting and will tie in the show with the release of their debut record; expect to lose yourself in their original, post-rock inspired sound. Finally, opening the show are Wicked Snakes (formerly The Orchard); back with a new name and a new sound, their groove-heavy, metal inspired riffs will appeal to fans of Cancer Bats.
Black Shapes themselves are putting on this show, and what an incredible line-up they have put together. Come and show your support, you would be a fool to miss out on so many good bands under one roof! See you in the pit.
Doors at 7pm, Curfew 11pm,
£6 On The Door,
18+
Visit drinkinbrighton.com/stickymikesfrogbar for more information.
facebook.com/bstns
facebook.com/Grappleruk
facebook.com/blackshapes
facebook.com/weneverlearnedtolive
facebook.com/wickedsnakesuk
Words by Sam Barnes.