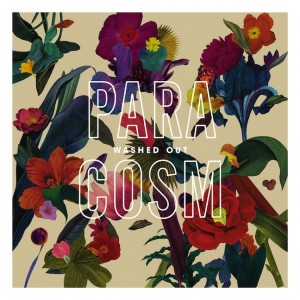 Washed Out jostles awake his first LP’s hazy nocturne with a blissed out sunrise of a sophomore – and it sounds as glorious a summer’s day as his debut was a balmy night.
Ernest Greene, aka Washed Out, defined the late noughties fad ‘chillwave’ with his early single ‘Feel It All Around’. It was all laced with eighties bassline and vocals barely discernible beneath the heat haze of lo-fi effects processing, ebbing back and forth in a dreamy wash of simple, evocative melodies. This had become a cliché by 2010, but Washed Out stood against the tide and continued to master the sound with his first full-length Within And Without in 2011. Its album sleeve presented a couple mid-coitus on a crisp-white bed, as glisteningly rosy and pretty as its forty minutes of memorable odes to midnight sensuality. Expanding the sound of his earlier EPs with live instrumentation and a touring band, the new era of Washed Out became richer and more tangible than any of his peers (Toro Y Moi, Neon Indian), tapping into a flushed, joyful vein of retro that the continually incessant eighties revival around him largely missed.
Paracosm, whose title refers to a childish, self-contained fantasy world, takes this selective microclimate of eighties nostalgia and cultivates it to a superlative lushness. The somnambulant echoes across Within And Without are replaced with glaringly bright melodies, shimmering with the heat haze of his EPs, but filled out with crisp live percussion, children’s laughter and analogue depth – and also harps, lots of harps. First single ‘It All Feels Right’ captures the mood most evocatively with its defiantly romantic picture postcards of summers past, bolstered by a synth string hook light enough to lift the listener out of the weightiest slumps. And it’s this purposeful focus on golden years, this firm grip on happier times that Greene means to maintain – Paracosm is a bright light to ward off darkness. Midway through the record, ‘All I Know’ admits “I feel it all” amongst a chorus melody that drifts back and forth in pitch before resting on a soothing note, when a pulsating synthesiser rings out a soft arpeggio that seems to bring the singer gently to ground. It’s these moments of unflinching warmth that do more than pull a summery filter over the record’s sound, they prove its evocative power. In typical Washed Out sensuality, you feel the music all around, and it makes its blissful fantasy a reality.
8/10, out now, Callum McLean.
Head to washedout.net for more information and to buy the album.
http://www.youtube.com/watch?v=qJILRWBKnQ4

Tags: chillwave, I Feel It All, Paracosm, Washed Out