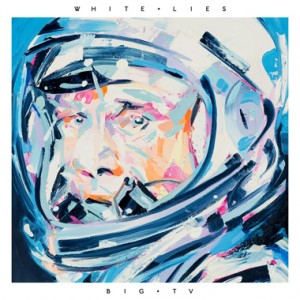 White Lies should probably be described as ‘post-post-punk’: back in 2009 they struck big by building on the gloomy Joy Division vibe that had already been expanded on half a decade previously by the likes of Editors and Interpol.
Now as if following a linear historical narrative, third full length Big TV takes these depressed 70s’ roots and points them towards the glittering 80s’. Built around the concept of ‘equality within a relationship’, the whole album shimmers with real optimism in both lyrical content and overall feel. It makes a contrast to a debut so gloom ridden that it was nearly comical – especially as the glum trio christened their debut single ‘Death’ – but like this slightly exaggerated angst ridden affair, Big TV’s songs manage to perform an often breathtaking balancing act between goth rock and epic stadium ready anthems with hooks as undeniably huge as the ambitions of the West Londoners that spawned them.
This album sticks to what made White Lies successful, yet builds on the elements that were previously lacking. The sound is as widescreen as the name suggests and unlike the noir sonic decor of their previous full lengths it explodes with colour; danceable, melodic and downright impressive.
7.5/10, out now, Ben Ward