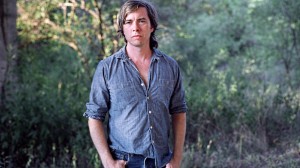 Bill Callahan well and truly cements his place in Americana’s great halls of rock poets on this evocative journey of flights, storms and al fresco sex.
Being granted a name like Bill Callahan does seem like being given some great rustic, American singer-songwriter boots to fill. With two decades of albums previously recorded under the alias Smog, Callahan has taken his sweet, gentle time wearing them in. And it’s hard to imagine a better fit than on his sixteenth album Deep River, which sounds every bit as mature as you’d hope; it doesn’t hurt that he’s also been blessed with an earth-shaking baritone, which has grown richer and deeper over the years, as if yearning to go back to ground.
To ground Callahan certainly does go on this record, seeking lovemaking “in the fertile dirt” on Spring and in most of its quiet moments seeking the warm confines of human relationships. But it’s also a record of gentle flights. Javelin Unlanding maps the heady, unstable ascent of new passion – “Don’t die just yet and leave me/ Alone, alone, alone/ On this journey round the sun” – narrated by rickety percussion and a guitar line oscillating like the frantic flap of wings. Much of the album looks down contemplatively at humbling landscapes from above; perhaps the record’s softest, most content moment in Small Plane comparing Callahan’s relationship to that of pilot and co-pilot, Ride My Arrow continuing the flight along the trajectory of an eagle flying “using the river as a map”.
But to position Callahan as a poetic naturalist would be over-simplifying his talent as a lyricist. Which isn’t to say that his words need simplifying – in fact, their power lies in their stark, direct evocativeness, whittled down to points as sharp as any in the vernacular of Americana (it’s not surprising that some see him as the natural descendent of Leonard Cohen). These range from the evocatively grotesque (that “things are dying/ Connected to the land like a severed hand” doesn’t curb Callahan’s libido; “The bantam is preening madly…and all I want to do is make love to you”, he rumbles saucily) to the darkly sad. Opener The Sing condenses a Tom Waits-esque loner-at-a-bar vignette into the pithiest pictures of drinking alone: “Well the only words I said today are ‘beer’ and ‘thank you'”. “Beer”, Callahan mumbles again twice, “thank you”. Crucially, every carefully considered line is mumbled wisely across well-paced measures of arrangements of gentle guitar and hand drums, allowing each lyric to resonate to full effect.
And underneath the artful structure of each delicately unfolding song, the album reaches a logical, dramatic peak at its centrepiece. Matt Kinsey’s guitar gets more and more tripped out as the album progresses and the songs widen, peaking during the epic jam of Summer Painter and its struggle with a raging hurricane, where delay effects rebound like crashing waves. But Callahan is as measured as ever even in the eye of the storm: “Like a sorcerer’s cape/ The rain lifted the lips/ Off the mouth of the bay”, he prophesies from some higher shore.
Overall though, Callahan seems largely at rest by the album’s close, its final tracks softly bookending a record that otherwise spans bleakness, untrammelled lust and The Old Man and the Sea-type battles between man and nature, yet somehow never leaves the warm hearth of Callahan’s fireside storyteller. As meditative and easygoing as it is bold, Dream River is a masterclass in rock poetry, and one to drift along to in all tides, whatever the weather.
8/10, out now, Callum McLean.
Head to Drag City Records’ website for more info, tour dates and to buy the album.