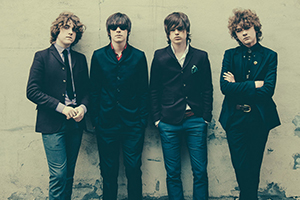 In the same way that Jake Bugg is oldies music made by a teenager from Nottingham, so The Strypes are vintage rock’n’roll made by four young Irish mods. Sounds like the ‘60s are making a comeback with today’s yoof… Saying that, their combined age is probably still less than Keith Richard’s.
There are some catchy hook laden songs on here. Their single “Mystery Man” is reminiscent of The Hives and circa 2000 garage rock. Not a bad thing, but nothing new. Do we really need another garage rock revival band? Where they do shine however is the scintillating guitar work from Josh McClorey, and the raucous vocal stylings of Ross Farrelly, both of which stand out on tracks like “I Can Tell”, which sounds like a Dylan Basement Tapes B-side, and “What the People Don’t See” where the harmonica and lead guitar battle for supremacy.
It’s not all flashy celebrity fans and stardom though (Sir Elton of John was spotted watching them play a gig at a pub in Brighton.) Some of their lyrics are laughable- “Because she floats like a bee but she stings like a butterfly”, whereas others imply wisdom beyond their years- “Well I’d love to steal your heart away/but baby I ain’t no thief/Well I can be the bad guy/ No I ain’t no Lee Van Cleef.”
Production-wise, the tracks have the same fuzzy retro guitar tone and they are all pitched around the same frenetic tempo. The song writing is hardly original, mod beats, and blues turnarounds, but the vibe of the album and the band’s image are first rate. The question is: Are these guys just style over substance? Yeah they’re just copying The Sonics, and they seem like a boy band from Ireland in cool shades and fitted suits, but are they the real deal? Time will tell, and these boys have a lot of time ahead.
6.5/10 Out Now. JDF
For more info visit thestrypes.com