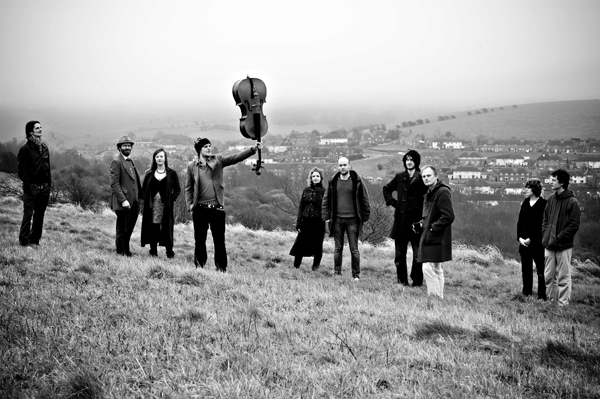 On a freezing cold evening at the end of January, it’s a wonderful relief to step into the packed out and cosy Albert for some heart-warming, folk inspired treats. Alessi Laurent-Marke, known musically as Alessi’s Ark, steps quietly onto the stage, and with hardly a moment of hesitation, begins her set, causing an immediate hush from the waiting audience.

Alessi plays her guitar with a lovely ease and effortlessness, which is a perfect compliment to her distinctive and unusual vocal style. Comparable to artists such as Joanna Newsom, Alessi’s voice is a bird-like trill, with an almost child-like feel. Alessi herself is a modest fringed figure, apologetic and shy; she diffidently tells jokes between songs to entertain the audience, “What do you get when you put a cow underneath a piano? Beeflat.”

She plays songs from her 2009 album release Notes From The Treehouse including ‘The Horse’ and ‘The Dog’ before inviting Marcus Hamblett from Sons of Noel & Adrian to play with her on stage. They perform ‘Woman’, Marcus playing guitar and harmonising Alessi on the chorus, before more members of Sons of Noel & Adrian join her on stage. Alessi’s sweet and childlike depictions of love and her quiet modesty mean that the audience can’t help but fall in love with her just a little, even forgetting her words on the final song doesn’t detract in any way from the audience’s love for her.

Following Alessi’s Ark are the nine piece band Sons of Noel & Adrian, who are also part of the Willkommen Collective – a Brighton based musical community. The band play a type of dark experimental folk mostly written by singer Jacob Richardson.

They open with recent E.P. track ‘Inside Olympia’ the band build momentum continuously throughout the song up until the point where all nine members are playing or singing simultaneously. They have a beautiful and remarkable sense of togetherness when they play, with a surprising collection of instruments and musicians creating melodies and harmonies when one might expect only noise; ‘The Wreck is Not a Boat’ opens with all nine musicians whistling in time with each other and it’s a pretty magical experience. Sons of Noel & Adrian show a clear enjoyment in playing and their pleasure is infectious even through their often dark and haunting music.

They finish on ‘Damien. Lessons From What’s Poor’, a poignant track where the gravelly and rough male voices harmonise with the high-pitched and pure sound of the women’s voices, in which the variety and range of the band is able to show its true merit. Alessi’s Ark and Sons of Noel & Adrian are two unique bands who are hard not to love.