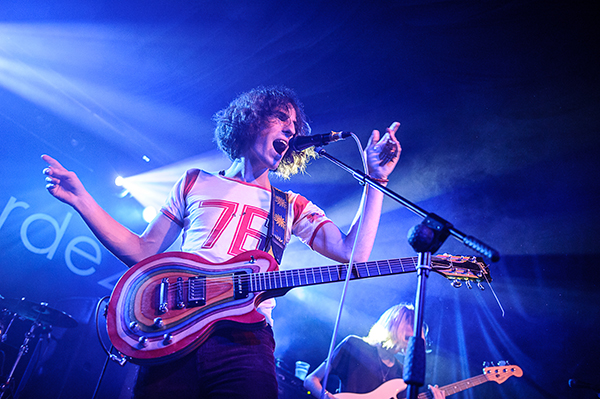 Swim Deep, Birmingham’s best baggy revivalists brought a performance full of energy and sun kissed vibes to Concorde 2 last night. After a summer of festivals and the release of their debut album “Where The Heaven Are We”, Swim Deep made us forget the surrounding miserable weather and instead transported their audience to a nostalgic daze of sun, stale cider and heat wave bliss.
Taking on a typical 90’s frontman stance, with his arm out and eyes closed, lead singer Austin Williams even looked the part as he swung his long hair in unison with the other scruffy band members. Whilst channelling The Stone Roses and Primal Scream, Swim Deep still manage to bring new sounds and approaches to their live show without sounding like a shoddy 90’s tribute band.

Showcasing tracks from their new album, Swim Deep’s every song was greeted with a high pitched squeal of teenage girls, G strings and hand claps aplenty. Leaving the festival stages for more intimate surroundings can be difficult but the band seemed were humble and charismatic. New hooks and rifts were added to songs to provide a more interesting live experience, as well as more prominence on the bass. Compared with their Great Escape performance earlier in the year, the band brought more precision with singles “King City” and “The Sea”, whilst still remaining pleasantly unpolished and raw. They even made a synth heavy rendition of Cyndi Laupers “Girls just wanna have fun” sound cool enough for the teenage hipster crowd to bop their heads to.
Their energetic performance mixing bending guitars, melodic vocals and dreamy shoe gaze make Swim Deep’s live show not only commendable, but fun, effortless and accessible. “Take your feet out your shoes and go crazy” ring the lyrics of “Honey” and the audience tonight obey.
Follow the band
swim-deep.tumblr.com
and facebook.com/SWIMDEEPUK
concorde2.co.uk
Words by Amber Ainsworth
Photography by Rachael Emily