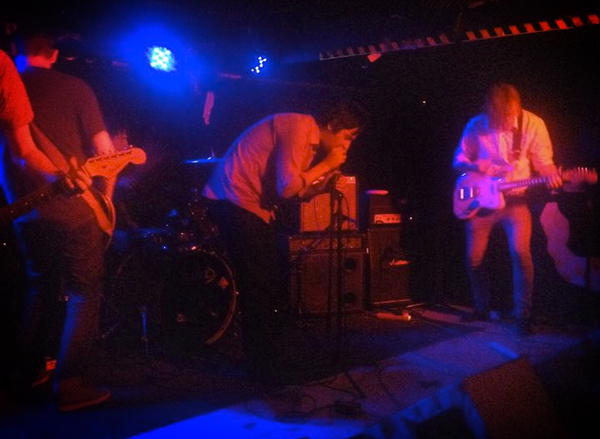 True to their reputation for dishing up delectable portions of embryonic, psychedelic drone to the minds of the impressionable and highly intoxicated, The Telescopes gave an ear-achingly mind-blowing performance at Sticky Mike’s Frog Bar this Saturday. Delivering a gut busting head start to their European tour, the band shot above their time-honoured status for superior space rock.
One Unique Signal opened the night hitting the stage hard with a savage blend of heavy, repetitive grunge followed by an extraterrestrial-infused psychosis from endearing oddball Crayola Lectern.
Telescopes lead singer Stephen Lawrie offered wretchedly wonderful and dreary vocals and spent much of the night crouching at the foot of the stage, doubled up in an agonisingly self-induced trance. The audience stood stock-still, frozen in custom shoe gaze tradition – with the occasional head nod and synchronised sway to and fro.
A performance that would be decidedly more appreciated by diehard drone enthusiasts, Lawrie left open the possibility of being mistaken for an unhinged Neil Morrissey to the public eye.
A chip off the old block from their original, iconic debut in the 80’s, the band have released several deliciously dismal recordings over the last two years, including the 2012 single “We See Magic And We Are Neutral, Unnecessary” and a reworking of Nick Drake’s “Black-Eyed Dog”. The band’s new album, “Harm” is due on 30th September.
A performance that was sure to leave your ears bloody.
Words/Pic by Amy Louise Banks