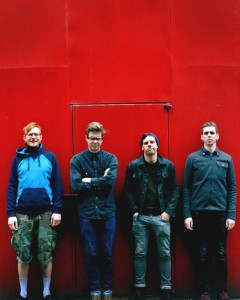 Tonight was the first night of the Death Pedals Vs. Yards tour presented by London based not-for-profit DIY collective Rip This Joint.
First up were FVNERALS, a band whose music is about as joyful as, well, a funeral. Delivered with minimal movement or audience interaction, their dark, ambient post-rock is haunting. Charismatic? Not at all. But unique enough to successfully capture the audience’s attention in a hypnotic fashion, even if at times it felt like a chore to keep it. Their drone-heavy music rarely reached a climax, but was at its best when it did, showing their bleak heaviness and engaging use of dynamics and electronics. A refreshing choice of opening band – I’m sure many, including myself, will be intrigued to see how they develop from here.
The room  filled up a bit more  in time for Broker to take the stage in a rough and ready fashion. They wasted no time falling headfirst into their sporadic math-punk tunes. ‘Falling headfirst’ implying they quite literally stumbled through it, announcing mid-set that they “haven’t played a show since June”. Unfortunately it showed, as they blurred the fine line between intentional sloppiness and actual sloppiness. The ideas were there though, and there were some moments of greatness stemming from their passionate delivery and complex instrumental sections.
Death Pedals quickly settled in to high gear and stayed there throughout their set, treating the audience to half an hour of punk infused rock ‘n’ roll in a “The Hives meets The Bronx” kind of way (but with more awkward stage banter). There was a false start in there, but Death Pedals kept the tunes coming consistently, and plenty of them, each offering more headbang-worthy riffery than the last. A little more diversity wouldn’t have gone amiss (no, not the street-dance group) but they succeed in finally giving the show the atmosphere it deserved.
As Yards took to the stage and blasted through EP opener “The Rut” it was clear that tonight was all about them. These guys were tight and their frantic hardcore plaeds host to plenty of interesting rhythms and even better riffs, sounding bone-crushingly good and eradicating any possibility of a dull moment. Ex-The Ghost Of A Thousand vocalist Tom Lacey swapped running around and bouncing off the walls in favour of playing the guitar alongside vocal duties; an usual sight in this genre, but one that suits Yards well. Bass player Rainey also deserves a mention for some great vocal deliveries. Songs from the band’s self titled EP went down great alongside some very promising sounding new numbers, before coming to the sludgiest of sludgy endings with “I Miss John Candy”. The headliners are still a fairly new band, and unfortunately the turnout at Sticky Mikes tonight reflected that somewhat. Nevertheless, those present had a great time and this is undoubtedly just the start of big things for Yards.
Words by Sam Barnes
drinkinbrighton.co.uk/stickymikesfrogbar
facebook.com/yardsband
facebook.com/DeathPedals
facebook.com/BrokerUK
facebook.com/Fvnerals