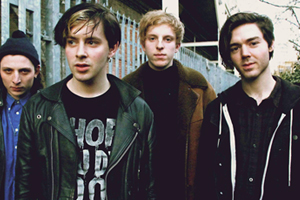 This indie-rock quarteT have come a long way since they played The Great Escape Festival here in Brighton last year, with their debut album out on Columbia Records, XYZ magazine’s Callum McLean caught up with singer Harry for a chat ahead of their show this month in Brighton ….
“Someone once said that our genre was ‘avant-garde lad-rock’”, mumbles Peace singer Koisser, in a hungover drawl that lasts the entire interview. Was he happy with that, I ask? “No. But it’s food for thought isn’t it”.
Typical of the roster of NME-touted indie bands of which Peace are currently top dogs, the nineties-curtains-wielding Brummie sustains this disaffected irony throughout our chat, in which he also concedes that he “downloaded some Bruno Mars yesterday. Why not”, as well as riffing on some highly dubious rumour: “[lead guitarist] Doug was a mysterious baby that just turned up on his parents’ doorstep and they kept him. And the doctors tested him and they said that he did not come from a man or a woman. He did not come from two humans, there’s something else in there. He’s a hybrid. Doug’s a hybrid.”
If this greasy sarcasm reeks of decades’ worth of arrogant, throwaway indie acts, the surreal strain to Harry’s jesting hints at Peace’s marked sonic difference from those peers: sort of NME-indie-by-numbers with a fruity twist. There are plenty of scowling choruses to pump those beer-brawl-hardened fists to, but they fit alongside tropical guitars, tinges of psych-rock and plenty of Happy Mondays baggy-style drums.
As the band are notoriously averse to being pigeonholed into genres though, we’re forced to get a bit abstract in pinning them down. If their sound was a pair of shoes, what would they be like? “They’d be, um, filthy. Really nice shoes but they’d be really, really filthy and worn in…some kind of leather. Maybe a cowboy boot but not a cowboy boot, just a boot. A really worn, white boot with wine stains.”
Self-dubbed ‘music to f*ck you in the heart’, I wonder whether this boot-rock has any unwanted side effects. “Yeah, well, internal bleeding. Just too much emotion. Emotion overload. Bloody chronic emotion.”
In keeping with this emotional overload, Peace have long been heralded by certain shades of the British music press as the future of indie music. And, luckily, NME – who had the band open for their prestigious Awards Tour earlier this year, alongside Palma Violets, Miles Kane and Django Django – aren’t the only ones paying attention.
Heading up the tour for the new album, they’ve just got back from maker-or-breaker SXSW festival in Austin, Texas. Exotic? “It reminded me of being at The Great Escape last year: all stuffed into smaller venues, and drinking all day.”
It sounds like the band have developed a boozy affection for our city, where they’ll be playing Concorde2 later this month. “Brighton usually ends up in, like, stupidly messy after-show things. I always have vivid memories of walking through streets…It seems to be one of those nights where you go to what seems like hundreds of bars, and then some random house. Brighton’s a good one for having a laugh.”
Peace play Concorde2 April 24, 7.30-11pm / £8 advance.
Tickets and more information are available at Concorde2.co.uk
Find out more from the band at PeaceForeverEver.co.uk