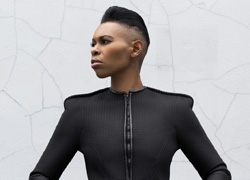 Skunk Anansie are one of the biggest bands Britain’s ever produced, racking up record album sales with their unique sound in the late nineties. So when they reappeared with new material in 2010 after a hiatus of nearly a decade, expectations were high. XYZ’s Jimmy Volts caught up with iconic front woman, the legendary Skin to get the story behind latest album ‘Black Traffic’ and their blistering return.
As one of the biggest UK Rock acts of recent years, Skunk caused quite a stir when they released their comeback album ‘Wonderlustre’. Many agreed it was as if they’d never been away. But what was it like recording after such a hiatus?
“We were excited, but it was hard because we’d all been off doing different things. With Wonderlustre, we were unsure what we wanted to do as a modern band. You don’t just get back together and everything’s perfect. We had to work through it.
The downside was that for the first time ever, we were put into a clique, which was all that reformation bullshit. We wanted to chase that dragon out of the cave quickly because for us it was all about doing some new stuff.”
Skunk Anansie’s work ethic was back in full swing once more, and last year  brought with it the release of their latest L.P ‘Black Traffic’ (2012). So how do they feel people have reacted to it?
“The great thing is that people are really into the new stuff. Which is a miracle when you’ve been around for so long, as we have. We didn’t even walk into the studio with any songs! We jumped off a cliff creatively, but luckily for us we landed feet first.”
The most recent material has been described as a rawer version of Skunk’s early records, with fans claiming it’s almost as if they never left. So what sets them apart in today’s music industry?
“When we first came out, there wasn’t the same level of maturity there is now. Today, we appreciate we have excellent chemistry, but we don’t analyse it too much. You either have it or you don’t. If you don’t treasure it, you argue, and your chemistry gets mashed-up. But we’ve never argued, which is why we came back to this with very open hearts.”
Skunk have made many critics eat their words with their comeback. Perhaps because they’re students of the old school. So what do they make of the current state of the music business?
“The way the internet & TV have changed the nature of music and modern mainstream radio is just…dreadful! The industry is on it’s knees, with Apple & iTunes controlling most of it. But on the other hand you have this huge underground scene which doesn’t give a shit what anyone thinks. They just do it for the love of the music. They say the art scene in Berlin was better before the wall came down, and I think that theory still applies. If you’ve got something to fight against, you come up with better material.”
Skin’s certainly hit the nail on the head with that one, and it would seem Skunk have triumphed against the odds. Their upcoming tour sees them coming through Brighton. So are they excited about it?
“Absolutely! Everybody in the band has spent a lot of time in Brighton over the years and there’s a great rock audience down there so it’s sure to be a wild one.”
Skunk Anansie play Brighton Dome on March 26 (14+) and ‘Black Traffic’ is on sale now.
Get tickets from SeeTickets.com
For more on Skunk Anansie, check out their official website at SkunkAnansie.net