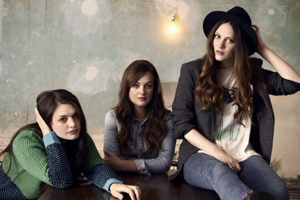 3 girls singing 3-part harmonies, The Staves have been whipping up a storm with their tour and the recent release of their new album. XYZ catch up with the girls late in London, as they recover from a gig and after party, to talk about their album & their next show.

You play in Brighton in April, what can we look forward to at the show?
Seeing us play the record live! We’re really looking forward to getting out around the UK and playing the record.
You’ve recently come back from SXSW, exciting! Paint a picture for us about what it was like, what happened on the journey over? What happened before you went out on stage for your performance?
We ate some horrific food on British Airways and watched some films. Jess watched The Master and Emily watched Up. Camilla slept. SXSW is absolutely mental – there are so many people and so much music going on everywhere. It is pretty intense. We played 2 shows – one at a church which was really lovely and one at a dive bar that was a little more rock’n’roll. Good crowds. There is not a scrap of healthy food to be found anywhere in Austin so we had to eat BBQ and pizza – even for breakfast. It has taken us several days to start to feel normal again!
Did you catch any performances whilst you were there?
We saw Vampire Weekend, HAIM, Mikhael Paskalev and Half Moon Run and Joe Banfi. All were awesome.
You’re planning some US dates later, what are the details?
We’ll be doing a headline tour of the US in May – details will be announced very shortly. We’re very excited!
Any favourite places in Brighton? Shops, pubs, places to eat etc?
A shop called PUSSY.
Your album is out! What can you tell us about the journey to releasing it?
It feels like it’s been a long time coming. The album has some of the first songs we ever wrote on it [like Dead & Born & Grown] as well as some of the most recent [Eagle Song]. Feels great to finally have it out there.
Do any of you have any ‘rituals’ when writing, or before you go on stage?
We sacrifice a virgin at every show. Tea when writing is very important.
What’s your favourite thing to do when you’re not working?
Watch Twin Peaks and Murder, She Wrote. And cook. And see family and friends.
Have you ever been an ‘April Fool’?
Camilla’s birthday is in April – we feel that makes her a fool. Jess once put her in the tumble dryer when she was about 2. A prank that still haunts us to this day.
The Staves play St Mary’s Church at Ashford in Kent April 18, presented by Brighton‘s favourite promoter ‘Melting Vinyl’. They also play The Scala, London April 24.
The new EP ‘Facing West’ is out April 29 on Atlantic records.
More from The Staves can be found at their website TheStaves.com