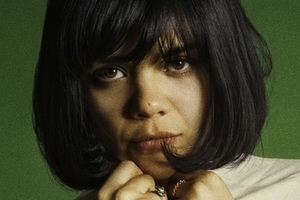 It’s no secret most artists to struggle with the dreaded ‘difficult third album’. And Brighton’s own Natasha Khan (AKA Bat For Lashes) has battled her share of creative blocks with her new L.P ‘The Haunted Man’. Thankfully though, the end result though is a joyously heady album that is undoubtedly her strongest work to date. Jimmy Volts caught up with the husky-voiced beauty on the eve of her UK tour to discuss how her coming of age lead to her most potent output yet.
The feather’s and talismans have been shed, revealing the underlying spirituality within Natasha’s artistic vision. But the new album was preempted by considerable creative hindrances which nearly led to her quitting music altogether. “I was at the end of my tether with the pressures of the machine by the end of touring the last record. I’m naturally a quiet person, and I like to make things. So when I came home I thought maybe I should just have some babies and not bother with this shit anymore” she laughs. “But lo and behold I did make a baby, albeit a musical one.”
This new arrival in her life represents Natasha’s transformation from wistful adolescent to strong independent woman, and the album is imbued with a sense of grounded elation which is fast becoming rare in contemporary music these days. “There’s a lot of romanticism surrounding darkness in music, which I love, but I felt it was more of a challenge to capture a broader emotional spectrum on this album. I wanted to focus on real existential happiness, being happy to be alive rather than complaining about it. I felt such rich emotions whilst writing these songs, and I wanted to crystallise that on the record.”
The elation of which she speaks is partly explained by Natasha’s tracing of her ancestral roots a year ago. A process which brought about a coming of age, a newfound sense of self and heightened spirituality which assisted in making this record such a fantastic body of work. Natasha also sought guidance from a seriously impressive list of producers and collaborators on this album, including the likes of Beck, David Sitek (TV On The Radio) and Justin Parker (Lana Del Rey), who helped co-write ‘Laura’, one of the albums’ undoubted highlights. “I definitely leant on other creative contemporaries more on this record because I felt quite alone. I was dreading the collaborative songwriting thing, because I’ve tried it before and it didn’t work. But with Justin it felt like we were kindred spirits. It only works if people on the same wavelength as you.”
Her current tour sees Natasha finish the UK leg here in Brighton. But do the hometown shows feel odd for an international artist? “I get quite emotional at Brighton shows because it’s my home. So I feel quite proud when I’m onstage at home. It’s like your parents coming to see you play or something. I’m really happy to be finishing there, it’ll be a nice homecoming.”
You can catch Bat For Lashes at the Brighton Dome on November 4th.
Tickets available at time of print from tickets.brightondome.org
batforlashes.com
Words by Jimmy Volts.