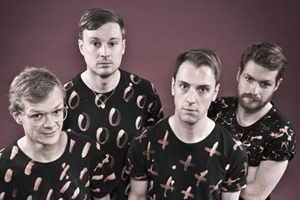 They appeared out of nowhere in January with one of the most impressive debut albums of the last decade. Since then, they’ve performed internationally, toured with their idols and received a prestigious Mercury nomination. In essence, 2012 has belonged to Scottish Psychedelic quartet Django Django. Jimmy Volts stole a moment with the groups singer Vinny Neff to reflect on their rise to fame.
DD are in such demand right now that Vinny’s to-do list doesn’t bear thinking about. He’s politely accommodating, but you can’t escape the feeling he probably has much better things to do than talk about himself. Regardless, he sums up this eventful year so far.
“Pretty phenomenal really. It’s far surpassed what we expected. We were happy to have the album finished and were intrigued to see how it would be received. But things have just motored! It’s been a great, albeit slightly surreal year so far.”The ecstatic acclaim for their eponymous debut record saw them earn a nomination for this year’s Mercury Music prize, which is a hefty milestone for any band. However, the group still retain their humbleness.
“It kinda felt like we had gatecrashed the nominations party and would get discovered at any moment. We grew up watching Mercury ceremonies, so to suddenly be there amongst all those journalists with the Maccabees and Richard Hawley literally meters away… I couldn’t quite get my head around it.”
And how do the boys plan to celebrate if they win?
“I suppose we would probably get a big bath like when you win the F.A cup with everyone jumping in with a bottle of champagne! (Laughs) At the end of the day I can only really think about how lucky we are to get nominated.”
DD’s 2012 tour schedule has been manic. They’ve a stint in the U.S before returning to the UK to support their heroes Hot Chip, then returning to Brighton for a sold out show at T.O.M. So do they relish life on the road?
“We enjoy touring when the components click together. Making connections, getting our sound the best it can be, having a crowd who are up for a good time. It’s almost constellation-like. Translating the album live is always interesting. It’s much rawer than people expect.”
DD’s last appearance in Brighton saw them perform to ridiculously sized crowds during the Great Escape Festival. So are they looking forward to returning this month?
“It seems like a really good crowd down there. They always seem like they’re up for a good time, so I’m looking forward to coming back.”
Tickets for Django Django’s show at T.O.M are now sold out.
You can purchase their debut album from djangodjango.co.uk
Words by Jimmy Volts