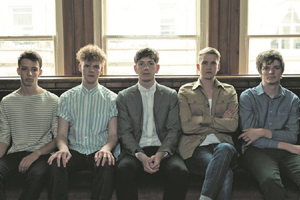 They’ve been bubbling under the surface of the Popular Indie rock mainstream for quite a while now, but Nottingham-based quintet Dog Is Dead have finally released their debut album proper. Jimmy Volts grilled the group’s singer Rob Milton prior to their UK autumn tour to find out what sets these likely lads apart from the competition.

Rob’s had a fairly peaceful morning and is currently playing car tetris with his gear in preparation for their tour in support of the brand new L.P ‘All Our Favourite Stories’. It’s a vibrant record of uplifting Folk-tinged Indie Pop with a sincerity that far surpasses their tender years. So how does he feel now it’s released? “I’m feeling pure excitement! It’s taken some time to get it out so it’s great that people can do what they want with it now. I’ve no idea where things are gonna go from here, but it’ll be cool to head out on tour and see how people react to it.”

Rob’s relaxed voice and easy-going disposition make him and the rest of ‘DID’ a unique prospect in today’s Pop scene. They aren’t your usual over-styled, over-hyped and underwhelming guitar act. And thank God! Because this record is a genuine poignant distillation of the great (and not so great) times these friends had growing up together. “There’s an automatic brotherhood in what we do. There’s no ego involved. Despite being in our early twenties, most of us have known each other for nearly ten years. We’re all best friends and we constantly surprise one another.”

DID’s ‘butter wouldn’t melt’ image and wholesome songs about friendship make for the kind of band that your whole family could get into. But we can’t help but wonder whether this is really a group of secret party animals. “Oh, we have a hell of a lot of fun! But we’re not diva heroin addicts with fantastically expensive skincare products or anything. It’s just that being cool has never been our agenda. In fact we went out of our way to make our latest music video as ‘douchey’ as possible, something that was reasonably naff.”

Rob goes on to discuss how much the lads love touring and how they’re excited to heading back to Brighton this month. “This tour’s gonna be fun as hell. It’s five people going mental onstage, and hopefully the crowd doing the same. The weather’s always horrible for us down there, but the last time we were in Brighton we had a blast. We invented a game on the pebble beach and hit the town after the show and ended up at the Green Door Store.”

The boys have a day off after their Brighton show, and Rob assures us that they’ll be out for beers afterwards. His advice? “Follow the ginger afro!”

Dog Is Dead perform at the Haunt on November 3rd.
Limited tickets available at time of print from wegottickets.com
£8.50 adv, 14+, Doors 7pm
dogisdead.co.uk