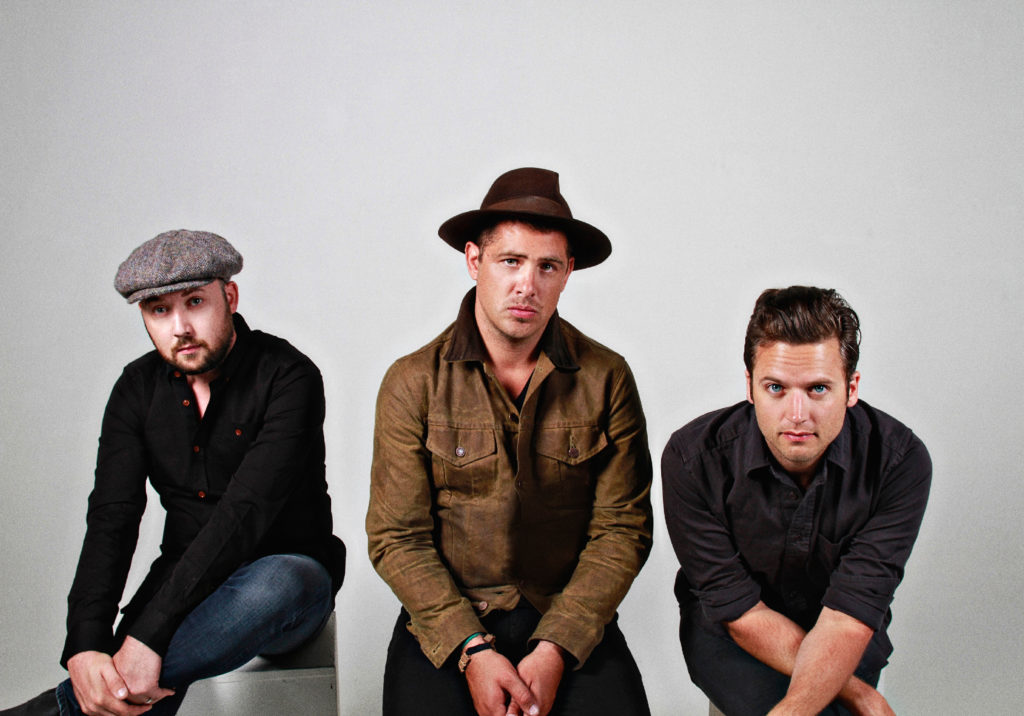 Augustines are a band that’ve been through the wars. The Seattle-based power-folk trio have bounced back from break-ups, family tragedy, tempestuous lawsuits and all manner of obstacles during their time together. Despite this, they’ve rolled with the punches, turning negative experiences into positive energy and channelling their struggles into two truly, stunningly inspirational records. Jimmy Volts caught up with drummer Rob to ask how they’ve survived what most bands couldn’t …
Augustines were born from tragedy. During the writing process for debut album “Rise Ye Sunken Ships”, they were dealt a devastating blow when frontman Jimmy McCarthy’s brother committed suicide. Against the odds, the band ploughed on, releasing the record independently to triumphant critical acclaim.
Soon after, their very name came under fire when a lawsuit with another band threatened to take it away. Augustines won, retaining their name whilst touring the U.S and Europe.
Earlier this year, they released their eponymous follow-up record. Rob explains the feeling within the band at that time:
“This particular record was us moving on from everything that had happened to the band, and trying to be a bit more hopeful. We’re happy-go-lucky dudes, y’know! We just wanna enjoy life like the next person. We’re so proud of the latest record and are amazed at how much support it has received. But there was definitely a nervousness when releasing it. It’s the dreaded curse of the second record y’know? How many bands do you know that’ve done pretty well with the first album only to disappear with the next?”
The odds may have been stacked against them, but like a true underdog, Augustines came out fighting and produced an album of life-affirming grandeur, this time imbued with a tremendous sense of optimism. It too, was received to unanimous praise and the band have since carved a reputation as one of the best live acts on the planet. It’s obvious they’ve moved on from the past with their eyes firmly fixed on the future. So what’s the consensus within camp Augustine now?
“James and I get on like a house on fire. We love playing live and I think we’ve really made a name for ourselves as a good live band. We’re taking all this positivity we’re receiving and channelling it back into the music. We’ve even started flirting with writing the next record. So over Christmas we’ll focus on getting new material down. And early next year we’ll go about compiling what we’ve written. It’s a non-stop way of life but you can’t complain y’know. We’re very lucky to be doing this. I couldn’t wish for anything more.”
The band’s optimism is contagious and it’s this very element which is the secret of their success. You’ll witness their magic for yourself if you can bag a ticket to their upcoming Brighton show. “This will be our first headline show in Brighton and we’re very excited. We try to play as long as humanly possible, so strap yourself in! We’ll be there sharing good times and singing along together for a couple of hours. It should be fun!”
Augustines play Concorde 2 on Sunday December 7th.
For more on the band see weareaugustines.com
Words by Jimmy Volts