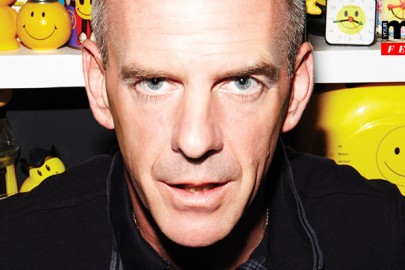 The international superstar DJ takes time out to talk about Coliseum’s (formerly Digital) charity fundraiser in aid of Coaching for Hope, December 17, plus the significance of David Beckham at Xmas – XYZ’s Léo finds out more …
You’re a patron at the Coaching for Hope charity. How did you first become involved?
I was bullied and lured into it by the Brighton and Hove Albion F.C! (laughs)
You like football don’t you?
I’m not so good at playing, but I like watching it and supporting it.
How did your involvement in the event at Coliseum December 17th come about?
It’s an ongoing thing. As patron of the charity my job is not just about fundraising – I am mainly their spokesman – but every charity needs hard cash every now and then. Once a year we do something! Also it’s the end of the year and I’ve realised I haven’t played a single gig in my home town. So it’s a good excuse to have a pre-Christmas gig. We did it last year in Digital, and the new owners of Coliseum were kind enough to take that on as an annual event.
This event is all about fundraising: everybody on the night will be contributing, even staff…
Yeah, everybody has been so generous, the door staff, and everybody working in the venue. Even my guests on the guest list are all paying.
The event is sold out, including the VIP tickets, which is a great achievement for Coaching for Hope …
At one point we were thinking about making all the tickets an auction. We were wondering how we could tap into people’s generosity at this time of year to make the most amount of money for charity. The event sold out immediately – so many people wanted to come, which is great!
For those who didn’t get their hands on a ticket, there are 50 tickets available on the door. And there’s a great incentive for people to be generous then…
Yes, on the night you pay as much as you can afford to get in, and the person who pays the most will get an enormous bottle of Grey Goose vodka, a signed CD and a very big hug and photo from me!
You are also making a special mix CD, available on the night?
Yes I will do an exclusive mixtape and I think I’m going to be writing the labels by hand. So it will be an exclusive one off, only for people who come on the night.
Tell us about what happens with the proceeds?
It all goes to Coaching for Hope – the money will be used to train local people, in some of the most disadvantaged communities around the world, to run coaching and games sessions.
Let’s remind our readers that Coaching for Hope has helped 50,000 children so far in 7 different countries. So far 1500 coaches have been trained! Amazing. With regards to the gig, what can people look forward to?
Well it’s an intimate gig with me. Last time I played in Brighton it was at the Amex Stadium (capacity 30,750) so this gig at the Coliseum will be very much up-close and personal. 3 days later I have a gig at the O2 Academy in Brixton so it’s kind of a warm up gig. I’ll be trying out some new tunes! For me it’s a way of keeping in touch with Brighton and doing something for charity… and it’s a week before Christmas, everyone will be getting excited!
What can XYZ readers do to help if they can’t get to the gig?
Check the website. We are always looking for people, not just to inject money but to get involved and go out there. They can get the experience of going to Africa and really get involved in the project. Of course it’s a much bigger commitment than just turning up to a gig, having some fun and donating some money!
A great night for a great cause. Now, with Christmas coming up fast, if you could give any gift, what would it be and to whom?
Well, let me think…I would give Brighton and Hove Albion an on-form striker in their transfer window (laughs).
What’s the worst Xmas present you’ve ever had?
A bottle of David Beckham aftershave. We used it as a propellant to light a fire. It makes the room smell of it for a while though! (laughs).
What’s on the cards for New Year’s Eve? Any gigs at all?
No, no gig, I’m spending it with the family this year. I usually do one year work, and one year spent with my family. Also my wife Zoe (Ball) has been doing Strictly Come Dancing for 12 weeks, so we’ll have a quiet one with the family.
And do you have any new releases coming up in the near future?
I think I’m going to be doing a compilation album next year.
The Coaching for Hope charity fundraiser with Fatboy Slim takes place @ Coliseum Wednesday December 17. Doors open at 8pm. To get involved, visit coachingforhope.org. You can donate at the website by clicking the big gold button at the bottom of the homepage.
Follow recently taken over venue Coliseum (formerly Digital) online for updates coliseumbrighton.com