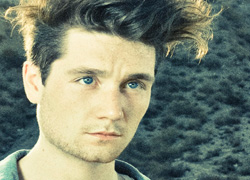 Having established themselves and toured extensively off the back of their EPs alone, Bastille drop their debut album ‘Bad Blood’ this month. XYZ’s Maison caught up with main man and self confessed control freak Dan Smith to find out how he went from making music on free software, to forming one of the most exciting new acts around.
All of your records have been self produced (alongside co-producer Mark Crew) did the process change after you got signed to a major label?
Not even remotely. I bought a new laptop and got Logic but that’s it. We recorded the album in the same way we had always done. I’m not hugely inclusive when it comes to the recording process, although the guys from the band came to do bits here and there. There was never a question in my mind that the process would change, I felt we could do it ourselves and we did. One thing we were given was a day at Abbey Road, it couldn’t have been further from recording in a cupboard!
How was it going from a small studio to one of the most famous in the world?
We had a hell of a lot to do, we bought everyone with us and they all had quite a nice time but mark and myself were just very focused. It was completely crazy to be there and I think it was difficult to take it in. Afterwards though we went to the bar and massively outstayed our welcome long after everyone else had gone thinking “We’re in Abbey Road man!”
How do you feel about talking about the songs on ‘Bad Blood’ given that, to you, the songs have been around a year or more?
I find it difficult to talk about to be honest and now the album is about to be released its really bizarre. People have never heard it and are coming to it as from a totally outsider perspective, where as to me some songs are really old and some are really new. It’s difficult to think about it as the album as a whole because I’m been so involved in it. I always feel like I’m not the best person to speak on its behalf, even though I probably should be.
Are you constantly writing then?
I am although at the moment we’re busy touring. I’ve actually got a day in the studio today and am recording new songs which, hopefully, will be on our second album, if we get to make one. I like to have a load of ideas on the go, even when I’m really busy but it can be hard.
There must be a massive difference between writing for fun and writing under pressure because a release is due…
I guess for me there isn’t any pressure yet. We’re in a weird position where we’ve managed to progress to a certain point before the albums even out. The tour we’re doing sold out a while ago and people seem surprised we’re able to do that without an album. But we’ve taken our time and built things up naturally over the last couple of years. As the albums only just out we’ve hopefully got a bit of time, although I do want to have written most of it by the end of the year. If the pressure comes from anywhere it comes from me.
You said earlier “if we get to make a second album” and I’ve noticed that you generally downplay a musical future. Are you naturally a cynic or are you just protecting yourself in case music doesn’t become you life?
I think its how I am. All of us in the band know we’re in a lucky position to do this as a job for now and I just really like writing and its what I do for fun anyway. Obviously being signed to a major label is a big thing but who knows what will happen. I’m definitely pessimistic and I also quite cynical so I don’t want to make any assumptions. Genuinely in the back of my mind I anticipate a point in the future where I’m freaking out and wondering where I’m gonna go with my life. I would love to keep on making songs and releasing albums but I would never, ever assume that would be the case any further than tomorrow…
‘Bad Blood’ is out March 4
Bastille play Concorde2 on March 25
Tickets can be bought at SeeTickets.com for £10+BF.