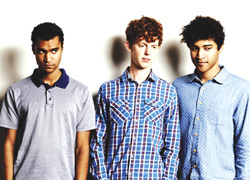 Signed to Transgressive, this good-time indie band are collecting up fans across the country with their feel-good sound. XYZ chat to Marcus Haughton from the band ahead of their show at The Haunt this month.
What were you doing before this interview? I went to a fashion show today. It’s London Fashion week and a friend who sometimes makes me clothes for onstage asked me to go with her! It was for a designer called Ashish and it was great because the clothes were all sparkly!
For the as yet uninitiated, Theme Park sound like … your ultimate late night summer beach party!
The album’s out, how does it feel to have it done and dusted? Great, we’ve been working on it a long time so it’s nice for other people to finally be able to hear it! Nerve wracking too as its a large body of work, hopefully everyone will enjoy it…
The bubbly’s flowing in your video for Tonight, when was the last time you celebrated with fizz? After a show in Paris. Our publishers always send us champagne when we play in Paris which is nice of them! I think before that it was when we signed our record deal with Transgressive. The next time will be on Monday when our album comes out!
You’re playing The Haunt next month, what can we look forward to at the show? We’re really looking forward to that show. Brighton’s one of our favourite towns. We’ve got our own light show this tour which should look cool. Every show we’ve done in Brighton has been wild so hopefully this one will be… wilder!
Your music follows a ‘good-times’ theme, when did you last cut-loose and party hard? HAHA yesterday, (speaking for myself that is). Last we partied as a group was at the Burberry Jake Bugg in session gig! There were free drinks all night so we all over indulged and ended up at a drinking den somewhere underneath the streets of Soho!
What’s it like on tour, do you share rooms? Who goes to bed the latest? I think I go to bed the latest because I’m excitable and have too much adrenaline! We change rooms around so we don’t get sick of each other.
Anyone got any habits they need a slap for? YES! Oscar always fiddles with his pedals during gigs, he deserves a slap for that!
Best place you’ve stayed at overnight whilst on tour / gigging? The best place we have stayed is in the Sultan hotel in Jakarta, its 5 star and is massive! The Rolling Stones played there ages ago and stayed in the same hotel. Apparently there were so many fans outside they couldn’t get out so a helicopter had to land on the roof to take them to the venue just over the road. That happened for us too of course.
What are you listening to at the moment? What are you into music wise lately? I’ve been listening to Hot Chip’s new album a lot at the moment. Also the new Bloc Party record and a slightly smaller band called Citizens who had their first album out recently.
What’s next for Theme Park? Well our album comes out on Monday! But you know that, there are going to be lots and lots of shows coming up from us, around the world! But we’re starting in the UK and then of to Europe in April for another tour, it should be a fun year.
What are you up to for the rest of the day? I’m going to go to a gig! Two gigs actually.. I’m off to see Fun Adults and the History of Apple Pie!
Theme Park will be playing The Haunt on Wednesday March 13 at 7.30pm.
Tickets are £8.50.
Tickets can be bought from Ents24.com
For more on Theme Park, check out their website at ThemeParkBand.com