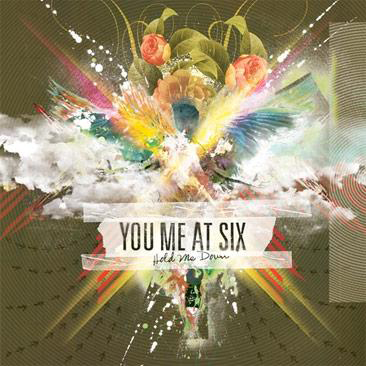 I click play and I’m greeted with “The Consequence”, a cacophony of air-raid siren sounds heralding listeners into the much awaited follow-up album from Surrey rockers, You Me At Six.

The promising teenage collaboration were once limited, only ever touring the British underground scene, but since the start of 2009 the band have stretched beyond British soil and exceeded everyone’s expectations. There was a summer of neglect as the band went trans-Atlantic to endure in one of rock’s most renowned tours, Warped Tour (home to influential American greats such as Blink 182, New Found Glory etc) and this was swiftly followed by the two month tour Fall Ball.

So YMAS are back, and ready to unleash Hold Me Down, aided by producers who have worked with the likes of Funeral For A Friend, Enter Shikari, Architects, Radiohead, Coldplay, Pearl Jam. The first track ‘The Consequence’ was a gift to the faithful British fan-base, as it was provided on the official website absolutely free of charge. With the addition of Sean Smith’s roaring vocals (The Blackout) integrated mid-song, this power-pop (and did I say free?) track is crammed full of passion and exuberance – definitely worth the download.

The first full single to be released is second track “Underdog” which is one to watch, where You Me At Six exert their usual formula which has so far proved successful. It is not particularly surprising and is probably devised to keep chart fans happy. The third track “Playing The Blame Game” fuses an element of pop-punk energy with a darker new wave edge and “Safer To Hate Her” begins to show the development of the LP with more reflection lyrically then previous hits such as “Save It For The Bedroom”. The boys are certainly not reliant on pure energy as the later tracks such as “Contagious Chemistry” and “Fireworks” demonstrate a more melancholic reflection, exposing to critics Josh Franceschi’s stellar vocals and aggressive articulation.

Hold Me Down is a definite sign of progression and will no doubt be celebrated as one of the killer albums of 2010. Josh, Matt, Max, Chris and Dan have been pretty selfless this year and it has certainly paid off. It sends a message to the fans; “we’re back, we’re British and we’re bloody proud to be”. I think this is what Hold Me Down is all about, it contains clear American influences but at the core there is an innate, British punk construction. If you are looking for pop punk with a more heartfelt, reflective, teen-angst edge; then You Me At Six are certainly the boys for the job.