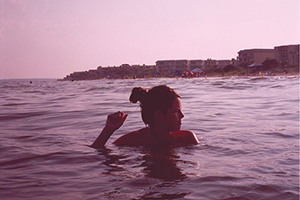 WASHED OUT RETURNS WITH A NEW ALBUM AND A TOUR, INCLUDING ONE OF ONLY THREE UK DATES AT CONCORDE2! ERNEST GREENE WILL BE JOINED BY HIS FULL 5-PIECE LIVE BAND FOR A MINDBLOWING LIVE SHOW!

Recordings by Ernest Greene as Washed Out have been nothing if not dreamy, but for his second full-length, he’s taken the idea of letting your mind wander to another state a huge leap further. On “Paracosm”, released Aug 13 on Sub Pop, the Georgia-based musician explored the album’s namesake phenomenon, where people create detailed imaginary worlds.
Following two years on the road in support of the critically acclaimed “Within And Without” which itself followed the lauded “Life Of Leisure” EP, led by the otherworldly magic of single, “Feel It All Around”- Greene and his wife, Blair (who plays in the Washed Out live band), decided to relocate from the big-city hubbub of Atlanta to a house on the outskirts of Athens.
Working daily for nearly six months, it was easy for Greene to begin shutting out the real world in favour of an alternate universe of his own making, with the rural setting acting as a prime catalyst.
With its gorgeous execution and uplifting attitude, “Paracosm” takes listeners to another, better, world. Let Greene take your there in person
Flights depart from Concorde2 on Wednesday 23rd.
Doors: 7.30-11pm, £12.50+bf adv from Concorde2 website, 14+ (under 16’s with adults)
Buy tickets here concorde2.co.uk
www.washedout.net
http://www.youtube.com/watch?v=-DkslcOhytU