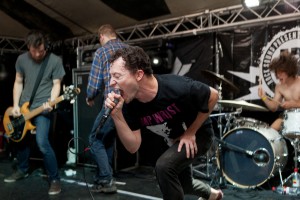 Critically acclaimed LA post-hardcore outfit Touché Amoré bring their melodic brand of sweaty, lovey mess to Audio, for one night only.
Since their first LP back in 2009, Touché Amoré have continued to carve a modest but fanatically loyal following with their particularly sincere brand of hardcore. Relatively orthodox in their style, and wreaking of (hardcore) punk authenticity, they also appealed to a much wider fanbase than the usual microscene-moshers, due to their incredibly melodic arrangements and infectiously heartfelt lyrics. Second album “Parting the Sea Between Brightness and Me” embodied their formula superlatively, creeping up many Best Of lists by the end of the year due to its powerful terseness. Largely adhering to a two minute limit, their songs went straight for the emotional jugular without compromising to repetition – what they have to say is said in Orwellian concision, if Orwell was a screaming Californian with a burning desire for self-expression.
The “emotional” part holds the key for why a purportedly screamo-revival band hold such strong appeal to a devoted but varied fanbase, and why this makes them such a thrilling proposition live. Jeremy Bolm’s approach since their inception, and continually on new, highly acclaimed album “Is Survived By”, is a brutally honest confessional style that somehow delivers teen-levels of diary entry-ish narcissism with the vigorous candour of a modern prophet. They are ’emo’ in the sense only of being believably passionate about their own place in their relationships to others, which comes across plainly on stage. Just as vitally expressed through Clayton Stevens’ and Nick Steinhardt’s powerfully melodic guitars as Bolm’s wide-eyed rasp, Touché Amoré are outwardly and unashamedly a band that desperately want your attention, and you’d do best to grant it to them.
7-10pm, £12 advance plus booking fee, aged 16+.
Head to audiobrighton.com for more info and tickets, and check out the band’s Tumblr for everything in between .
Words by Callum McLean