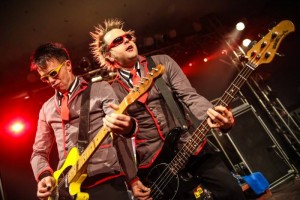 ‘Everything except disco’ – longstanding punk rockers The Toy Dolls hit Brighton this November at the Haunt, with latest album glibly titled ‘The Album After the Last One’ (released spring 2012 on Secret Records)
These vintage rock n rollers started out in the North East, in Sunderland back in 1979, and after several world tours and a respectable number of releases, the boys are still going strong on the live scene.

There’s nothing old or tired about the Toy Dolls – longstanding line-up Olga on guitar and vocal, Tommy Goober on bass and The Amazing Mr Duncan on drums who give every show their own full on rocked up energy.
Their special brand of brash punk brings to the stage all the best elements of anarchic rock n roll, drawing influence from acts such as the Sex Pistols, Sham 69, the Skids and the Undertones, with throwbacks to The Shadows, Chuck Berry and Status Quo. Expect mosh pits, power chords, sing a long hooks and guitar solos all played very loudly with a generous pinch of humour.

For lovers of vintage punk, and acts like Bad Religion – this is a sound that never dates, up to the minute full, good old fashioned on rock. A night with the Toy Dolls is doubtless the best way to lull your ears into a state of blissful (temporary) deafness.