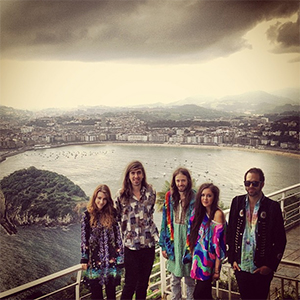 This chirpy bunch have come a long way since their debut album, ‘Star of Love’, in 2010. With certain tracks hitting a huge amount of publicity via an Easyjet advert, the Fifa ‘14 soundtrack and the especially exciting release of ‘Love is All I Got’ with Feed Me, the band are on a winning streak and this tour follows up the release of second album, ‘Cave Rave’ earlier this year. Their layered and angelic melodies are accompanied by both acoustic and electric guitars, drums, synths and the more obscure choice of a variety of basque instruments (including a txalapartas, if you fancied trying to pronounce that), creating a juxtaposition of folky tunes with electronic elements.
These stylistic choices, along with incredibly catchy beats, surely helped them achieve the unofficial status of creating the ‘Hottest Record in the World’, according to Zane Lowe on Radio 1, with reference to their recent single, ‘You and I’. Somehow, the fusion of genres has created a lively hybrid of festival dance tunes bound to get the huge crowd of bodies at supreme Brighton venue, Concorde 2, jumping.
Post selling-out in advance of their North American tour, and with a setlist containing mesmerising tracks such as “Plage”, “I Love London” and “Swallow”, you’ll kick yourself if you’re missing out on their upcoming Brighton show, which sold out quick-time as soon as the date was confirmed.
Starting at 7:30pm, Thursday November 21, £11.50, 14+
By Shira Rossiter
Crystalfighters.com
Concorde2.co.uk