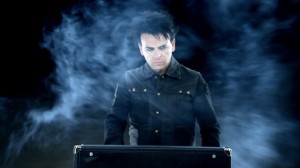 Apparently never complacent with remaining a synth-pop pioneer and ineffable icon, The Numanoid continues this episode of his exorbitant career at The Dome. Expect heavy doses of industrial rock and more of bug-eyed electro-goth weirdness.
When he emerged at the end of the seventies, then known as Tubeway Army, Gary Numan was largely dismissed as an un-hip bandwagon-jumper-Bowie and Cabaret Voltaire watered down. But his enormous chart success not only skyrocketed his own fame but also the popularity of electronic music in the charts. It’s impossible to imagine the past thirty five years of music without the effects of his huge synth hooks, ‘Cars’ and ‘Are “Friends” Electric?’ (the mighty Sugababes revamp probably didn’t hurt either).
But never satisfied, Numan followed up his first three seminal albums (two with Tubeway Army) with a career that’s spanned twenty two LPs and a whole lot of eyeliner, as well as repeated, adoring references and some cameos in Noel Fielding and Julian Barratt’s The Mighty Boosh. Later, his foray into industrial rock seems to have singlehandedly spawned Nine Inch Nails’ career, which increasingly feeds back into Numan’s newer, grizzlier work.
His show at the Dome will follow the release of yet another album, Splinter (Songs From A Broken Mind), which charts a harrowing period for the artist, struggling through depression and the responsibilities of parenthood. But after a revamp and a move to LA, The Numanoid is well and truly recharged. His return to the UK will boast an ever defter mixture of old and new in his live set, those synth classics fused effortlessly with the gorier parts of his more brutal later work. Relentlessly hard as a performer, 55-year-old Numan’s stance is as powerful as a man of twenty (and considerably more than his own nervous early performances), and has the major benefit of an immense backlog of hits. Don your mascara and grind down to this bug-eyed electro pioneer.
Doors at 7pm, £25 plus booking fee.
Head to brightondome.org for more info and to buy tickets, also available from Resident Records. For more info about The Numanoid, check out his website.
http://www.youtube.com/watch?v=Uu6MDdxBork