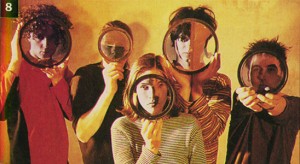 Space-rock sweethearts The Telescopes will no doubt execute a memorably mind-altering appearance at Sticky Mike’s Frog Bar this Autumn.
Formed in 1987 and undeniably the lovechild of bands such as Suicide and The Velvet Underground, The Telescopes have been unforgivingly unleashing their primordially psychedelic drone on ever hungry individuals for well over two decades.
Since their iconic 80’s debut, the band’s presence has been fitful, but their two most recent singles have heralded a welcome return – A ‘drone’ reworking of Nick Drake’s “Black Eyed Dog” on the ‘Trensmat label’ in April 2012 was followed by a track brought forth from the unbalanced minds of the artists themselves, entitled “We See Magic And We Are Neutral, Unnecessary”. The band’s new album, “Harm” is due on 30th September, available for pre-order here.
Serving as a life source for bands such as Loop, Spacemen3, JAMC & MBV,  these guys were pretty much accountable for taming our ears to the primal kaleidoscopic Space-rock vibes that paved the way for the entire Shoegaze/ Nu-gaze genre and as such, can claim some credit for introducing bands like Slowdive and Ride.
Performing alongside the psychotropic tones of One Unique Signal and the delectable misfit Crayola Lectern, lead singer Stephen Lawrie will undoubtedly be a sight for sore eyes.
Starts 7.30pm, Tickets £7
For more information and tickets visit resident-music.com/tickets
Follow them on Facebook at facebook.com/thetelescopesuk
stickymikesfrogbar