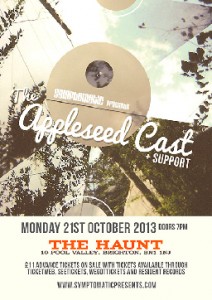 Since forming in 1997, the Appleseed Cast has morphed from one of the definitive bands of the emo era into a group that has continued to open up the possibilities of rock music. Whether cloaked in delicate melodies, atmospherics and instrumental experimentation, or stripped down to the band’s spin on the basics of rock ‘n’ roll, with each new recording, fans around the world have learned to expect the unexpected.