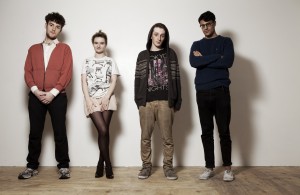 Baroque / deep house wunderkinds and this month’s XYZ cover artists, Clean Bandit are set to wow Digital with their pop-orific blend of strings and jump-up dance music.
It’s not the most logical pop formula: classical strings and London-centric house sounds. But somehow Clean Bandit have managed it with aplomb, with second single “Mozart’s House” breaking the Top 20 earlier this year and winning them a support slot with Disclosure amongst a host of crowd-drawing festival shows. If Disclosure (alongside Duke Dumont and peers) helped to set the contemporary tone for deep house, Clean Bandit are a step ahead with one foot tapping 128 beats per minute and the other poised in cello stance – something cellist Grace and violinist Neil manage to encapsulate on stage, shimmying endearingly round their instruments and alternately finger pumping and expertly bowing strings. “Mozart’s House” expressed this most directly with its now infamous opening address to EDM-haters (“So you thing electronic music is boring…you think it’s repetitive. Well, it is repetitive”) trailing along bubbling house, before the creeping in of elements from Wolfgang Amadeus’ String Quartet No. 21. But follow-up “Dust Clears” – as well as a host of EPs and equally infectious singles – showed this summer that there was more to Clean Bandit than fusion novelty, its gently undulating verses demonstrating a wider sonic range than you might have expected from a band combining chamber music and drum machines.
Their live show tears along at breakneck pace. Despite no full-length in the shops, Clean Bandit have managed to muster up a full set’s worth of blindingly catchy numbers, powered up by a strong set of vocalists and a handful of smart covers (SBTRKT’s “Wildfire” routinely instigating cosmic boogying). It becomes quickly apparent how the four-piece manage it – expert dance music dynamics and masterful musicianship propelled along by a rapidly increasing collection of melodies capable of inducing ill-judged wiggling from mums and aunts nationwide. Bring them along – if they don’t come for the beats, they’ll stay for the strings.
Doors at 7.30pm, £11 advance, aged 16+.
Head to livenation.co.uk  to buy tickets. For more info on the band, check out their website
yourfutureisdigital.com/brighton
Words by Callum McLean