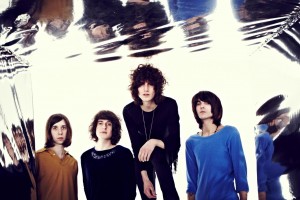 Psych-revivalists Temples know the book back to front, busting harmonies like Lennon and big dreamscapes like The Flaming Lips. It’s no wonder they’re billed as “the best band around” by Johnny Marr and Noel Gallagher – just Komedia left to please then.
Perhaps it was the small-town upbringing, because Kettering’s Temples seem to live and breathe the acid-laced groove of 60s psychedelia, despite having grown up around UK garage and britpop. While it would probably be unrealistic to imagine their foundations in a dreamy adolescence, all perms and jamming out to reams of dusty LPs with faded kaleidoscopic sleeves, it’s fair to say that this is exactly what they sound like. Of itself, this might not seem like a unique selling point in 2013. But if this year’s psychedelic revival is in full swing, Temples lie well and truly at the apex.  Nestled somewhere between the psych classics of the period, The Flaming Lips’ cavernous production and the melodic modernity of Tame Impala, their breed of revivalism is as full of genre tropes as it is of undeniably excellent songwriting. Heavenly Records clearly thought this when they signed them off the back of one song before they’d even played live together. That’s probably because the sitar-like riff of “Shelter Song” is the best around for years – Lennon’s probably grooving in his grave.
Despite this initial lack of live experience, the band are obsessed with achieving on stage the immaculate clarity of their carefully scattered records – self-produced in lead vocalist James Bagshaw’s bedroom. With stiff competition from an ever-increasing roster of fellow psychsters on the circuit, Temples opt for precision over showmanship, so don’t expect NME-appeasing antics from Bagshaw and co on the Komedia stage. Do expect, however, an unrivalled masterclass in revivalism – one that never errs too far into the rich sonic territory of the past without coming up fresh and infectious as hell.
Doors at 7pm, £10 in advance plus booking fee, aged 14+.
Head to komedia.co.uk for more info and to buy tickets, also available from Resident Records.
Words by Callum McLean