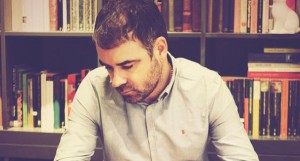 As much an urban folk hero as sonic pioneer, the former Beta Band frontman Steve Mason returns to Brighton with a highly acclaimed new album’s worth of songs marrying the deeply personal with some of the most outspoken protest songs to emerge since the London riots – you Beta be there!
On the back of their first three, unanimously critically acclaimed EPs (collected on the innovatively named The Three EPs), The Beta Band cemented their place in the lofty halls of cult heros. Marking most Top Albums of the Decade lists from the nineties, purportedly playing on repeat during Radiohead’s recording of OK Computer and even pleasing Noel Gallagher, The Three EPs was enormously influential with its marrying of acoustic songs with trip hop experimentation, lengthy builds and non-traditional song structures. Famously, John Cusack’s character in the 2000 film High Fidelity effortlessly sells five copies just by playing one minute of opener Dry The Rain, subsequently also gaining the band a fanbase of some thousands across the pond from among the film’s audience.
After the kind of messy follow-ups and quick dissolution only granted to the most iconic of bands, frontman Steve Mason moved onto a solo career under the pseudonyms King Biscuit Time and Black Affair. Maintaining high critical acclaim, Mason’s work nevertheless failed to move him beyond a warmly regarded cult figure – that is, until this year’s release and Mason’s second under his own name, Monkey Minds in the Devil’s Time. Continuing to master the kind of wide sonic palette for which The Beta Band were beloved, Mason also proved how much of the band’s success was down to his own solid songwriting. Translating into subtly moving pieces, the dark experiences of his battles with depression and attempted suicide, Mason also formed one of the most explicit and coherent protest albums following 2011’s London riots, on songs like Fire! and Fight Them Back.
Live, Mason is known to pare down the complex wealth of his artistry into more traditional sets, backed by a strong four-piece. Gone are the samples (and emcee on More Money, More Fire), but the messages remain the same. Having previously addressed directly the legacies of Thatcher and Blair, Mason addresses the contemporary climate with the wisdom of experience, charged by the raw wounds of a life lived close to the edge – even after The Beta Band, Mason struggled with unemployment and bankruptcy. Unlike the questionable theatrics on Plan B’s Ill Manors, or Speech Debelle’s impassioned sermons, Mason demonstrates the ills of modern politics along subtle lines, letting his words do the talking alongside gentle jazz rhythms and meandering arrangements. With a sound like Mason’s, there’s no danger of the message getting lost in the groove – though less can be said about Concorde2’s audience this month.
Doors 7-11pm, £16 advance plus booking fee, aged 14+
Head to concorde2.co.uk for more info and to buy tickets, also available from Resident Records. For more info about Mason, check out his website
Words by Callum McLean