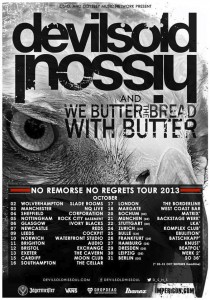 It was around this time last year that Devil Sold His Soul released their third full-length “Empire of Light”, an album that stayed true to the progressive ambient metal of their previous efforts, but streamlined into slightly more accessible chunks, gaining the band some great critical acclaim. Since then, long time frontman Ed Gibbs has departed, leaving the door open for new vocalist Paul Green (The Arusha Accord). Have they still got it? You can decide for yourself after listening to their new single “Time” which has surfaced online just ahead of the “No Remorse, No Regrets” tour; the first chance you have to witness the bone-crushing sound of DSHS live with their new line-up. Support comes from German electro-deathcore mob, We Butter The Bread With Butter (yes, that is their band name) and Palm Reader; one of the most exiting upcoming hardcore acts to emerge in a while who will no doubt deliver an intense live performance.
16+, 7.30pm, £8, Friday October 11
Words by Sam Barnes
facebook.com/devilsoldhissoul
facebook.com/WBTBWBofficial
facebook.com/wearepalmreader