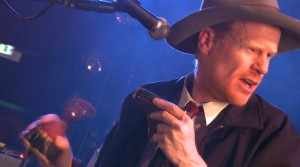 Ex-Crash Test Dummy, private eye-lookalike, smutty music columnist and beat-boxing blues-man, Son of Dave is a vaudeville throwback full of enough lusty tunes and sideshow novelty to keep anyone hooked for the length of his spit-riddled live slot.
A bona fide veteran, Canadian Benjamin Darvill has spent the past two decades earning the oddball stripes necessary for anyone aspiring for blues authenticity, most notably as the harmonica, mandolin and guitar player for Crash Test Dummies – remember ‘Mmm Mmm Mmm Mmm’? Returning to a solo career in 2000 as Son of Dave, Darvill began carving a name for himself as an early pioneer of the loop pedal. Though a blues man through and through – his songs largely fit a strict 12-bar pattern – he comes off as a contrastingly modern relic, marked not just by his use of technology but a stolid faith in beatboxing through his harmonica, and shades of R&B to his infectious, lusty melodies. The formula has spanned five studio albums, from which he’s been featured in everything from his own commercial for Bing (tracking Darvill’s progress towards one of his shows), a Robin Williams movie and Breaking Bad.
That said, a general criticism of each album was their inevitable failures to be able to reproduce the madcap energy of Darvill’s live show. Put on a stage, Son of Dave becomes a pedal-manipulating puppet master of what sounds like a Beck-in-a-box, with the added theatric charisma of a post-Tom Waits sideshow performer. Having done a long stint for the since out of print Stool Pigeon, Darvill proved himself a mythic persona of supremely witty bile to rival the whisky-soaked archetypes of American fiction – which is appropriate, as he dresses like one, never seen without suit and fedora. Live, this translates to an unbeatable, unpredictable stage manner which ensures that the Son of Dave experience is just as much about theatricality as the saliva-draining bouts of lightning-paced beatboxing that underly his harmonica tearing and wild vocal riffing. Appropriate to the Komedia’s mixed cabaret content, Son of Dave is here to entertain by any means necessary, whether with the blues or the boozy rantings of a wordy, gurdy maniac – don’t miss it.
Doors at 7.30pm, £10 plus booking fee, Aged 14+.
Head to komedia for more info and to buy tickets, also available from Resident Records. For more info about Son of Dave, check out his website.