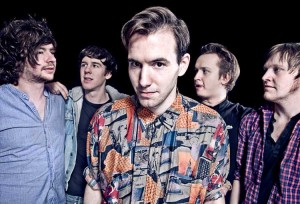 Manchester art-rockers Dutch Uncles promise bucketfuls of twisted pop song structures at their Komedia show this winter – good luck keeping up with the time signatures…
At the release of their third studio album at the beginning of this year, Dutch Uncles represented a recent new wave of Manchester bands – antidotes to the Oasis of musical dinosaurs more often associated with the city. Sharing most kinship with Everything Everything’s falsetto-driven, wonky po-mo pop, Dutch Uncles have nevertheless been playing the game since 2009. Both show blatant affection for proper pop music, but while EE’s Jonathan Higgs’ falsetto nods obscurely to nineties R&B, Dutch Uncles’ Duncan Wallis comes across like Hot Chip’s Alexis Taylor if he was attempting to front a mix between Talk Talk and Spandau Ballet. But if they’ve struggled to achieve the popularity of their Manc contemporaries, it might be due to placing less importance on a killer chorus, and more on the stilted, angular journeys throughout their complex songs. While there is oodles of eighties pop know-how scattered across their rarely standard time signatures, they borrow just as much from krautrock and modern classical a la Steve Reich. It’s hardly a recipe for chart success.
It is, however, a recipe for intriguingly dense pop, and a thrillingly entangled live act. Andy Proudfoot lives up to his name with a gratuitous, tightly-sprung rhythm section that springs from 4/4 to 7/8 to 13.25/pi and three quarters without missing a beat – but the rest of the band aren’t far behind. Stuttering guitar slashes, shuffling marimbas and Wallis’ own jerking vocal pile up into a moreish jigsaw of cerebral pop that doesn’t miss the heart on the way to the head. Songs from the new record, “Out of Touch in the Wild”, span highs and lows: chemical, spiritual and very real in dealing with the loss of a close friend. Which, while it might not afford them quite the buzz of tour-mates and musical kin Everything Everything, does make them a rare proposition: a kind of modern Talking Heads with the benefit of decades of post- and math-rock, and a stolid lyrical and emotional undercarriage to boot. Let them carry you away at Komedia (where they’re joined by a string ensemble) – even if most likely you’ll spring back one beat early.
Doors at 7pm, show at 8pm, £10 advance plus booking fee, aged 14+.
Head to komedia.co.uk for more info and to buy tickets, also available from Resident Records. For more info about Dutch Uncles, check out their website.
Words by Callum McLean

Tags: Dutch Uncles, Everything Everything, komedia