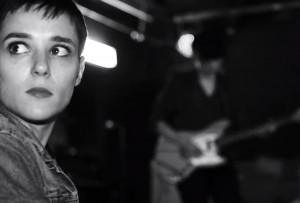 Don’t let their Mercury nomination fool you, all-girl post-punks Savages still mean business – and for one night only, that’s to teach Concorde2 new meanings of snarling, defiant noise.
Since their inception in 2011, when guitarist Gemma Thompson and bassist Ayse Hassan brought in their friend Camille Berthomier (pseudonym Jehnny Beth) as frontwoman – she wouldn’t prefer ‘front-person’ – and infamously brutal drummer Fay Milton, Savages have not been a band marked by compromise. One of many pointed manifestos adorn the monochrome sleeve to their highly critically acclaimed (and now Mercury-shortlisted) debut Silence Yourself: “SAVAGES’ SONGS AIM TO REMIND US THAT HUMAN BEINGS HAVEN’T EVOLVED SO MUCH, THAT MUSIC CAN STILL BE STRAIGHT TO THE POINT, EFFICIENT AND EXCITING.” Their song titles are as short and sharp as Beth’s furious lyrics, and every other element to their sound is equally cropped down to its most efficient, maximum potential for effect. But their approach also presents numerous paradoxes: unflinchingly for female empowerment, they nonetheless refuse the label ‘feminist’; purportedly uber-DIY in their ethos, but their album released on major-indie Matador Records and was self-submitted for the Mercury prize; noticeably fresh and direct in 2013, but strongly tied to the post-punk sounds of the late ’70s and early ’80s; and ultimately liberal with the reception and interpretation of their music, despite all the specifics of their manifestos. Because at their vigorously beating heart, Savages only fight their musical wars for one cause: emancipation.
Not emancipation of any specific groups or political causes, but their idea of bullshit-free, direct contact – and invigoration – of everyone faced with their music. This motivation lies behind every one of Jehnny Beth’s body-jerks, arm-thrusts, howls, yelps and shouts during a Savages gig. But it also informs the whole band’s startlingly dominating sound. Milton’s breakneck drum-hits span krautrock-grooves, punk rock pace and hard rock dynamism, driving the sonic behemoth carved by Hassan’s melodic, tunneling basslines and Thompson’s searing guitar – which itself verges between angular, Wire-esque intricacy, overdriven punk shredding and soaring twists and turns of feedback and screaming, monitor-endangering scratching. They might ask the audience to refrain from using mobile phones or cameras during the show – “to discover better ways of living and experiencing music”, they say – but no one’s going to be called out on it. Because while Savages are doing their thing, no one could feel obliged, limited or pressured into anything. Anything, that is, except going more than a little bit wild.
Doors 7-11pm, £12.50 advance plus booking fee, aged 14+
Head to concorde2.co.uk for more info and to buy tickets, also available from Resident Records. For more info on the band, check out their website
Words by Callum McLean