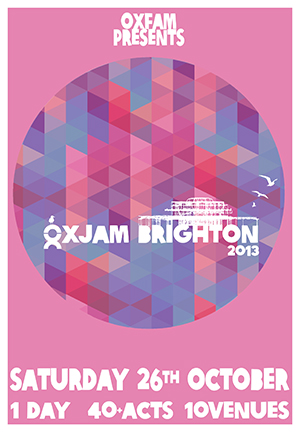 It’s almost that exciting time of year where thousands of musicians, fans and hundreds of venues nationwide come together for a whole month of gigs for one intention – to play their part in Oxfam’s fight against poverty around the world. Oxjam takes place in October and since 2006 have raised £2 million in their fight… This month, more than 800 venues, 9,000 volunteers, 7,000musicians and 150,000 audience members will help make Oxjam bigger and better than ever.
Oxjam is a festival with a difference: thousands of fundraising music events are put on by ordinary people who know and love their local music scene – from large-scale festivals to local sponsored busks – making it the biggest line-up of any music festival in the UK. Local music for a Global impact.
The Oxjam Brighton Takeover this year takes place in multiple venues across the city on Saturday 26th October, with acoustic coffee shop sessions throughout the day, bands and artists playing all afternoon and evening and DJ’s through the night; it’s set to be the biggest one yet!
No stranger to emerging talent, local music college BIMM are backing the event this year as headline sponsors. Oxjam Brighton is also kindly receiving help and support from Above Media, JT Lighting, TSL Lighting, The Pret Foundation and Chameleon Designs.

Oxjam Brighton Takeover have released tickets online at wegottickets.com which are now available at the early bird price of £5, with 100% profits going to Oxfam. This will get you a wristband for all venues all day & night. Price will increase close to and on the day. And if for any crazy reason you can’t make the festival, you can still do your bit and donate to Oxfam –  Justgiving: Text OXBR to 70070 to donate £5

Wednesday 30th October at The Haunt – Younger music fans can also get involved! An over 14 night in conjunction with Oxjam, ‘DÍA DE MUERTOS’ – Showcasing some of the best young, unsigned bands from Brighton and coinciding with Golding’s debut EP launch “Mind Device”. With a ‘day of the dead’ theme for Halloween! Rising stars include –

Tickets are £5 donations to Oxfam – contact Momo for tickets and more info – momokohill@gmail.com