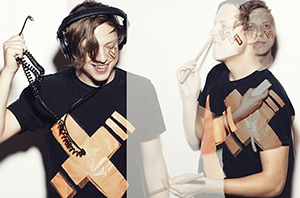 After a heady year establishing his sounds with the masses at events such as Coachella, young and talented American electronic artist Robert Delong looks ready to give us an impressive show at The Green Door Store. His critically acclaimed single ‘Global Concepts’, which inhabits a Moombahton beat, edgy vocals and soaring synth hook, creates an addictive and refreshing hybrid genre which should go down nicely with the stripped down space and large dance floor the venue boasts. His live act would be an impressive feat for several members, let alone just him dashing from gizmo to gadget and back. With a drummer for a father, you can hear the years of influence and experience as he lashes at a drum kit in between singing through various microphones and modifying his sound with a perplexing amount of gadgetry. Most impressively, this includes a gaming joystick and a customised Wii-Mote, re-applied to vocal-altering effect. Whilst this may sound gimmicky, his ability to use these devices, and at such an alarming rate, makes it possible to imagine him taking on Jin8 at Tetris, if he was ever that way inclined (this way for brain-melting)….
Luckily for us, he’s currently not, so head over to The Green Door Store for an electric boogie.
7:30pm, Thursday August 22nd, £6.00, 18+
Words by Shira Rossiter
Robert Delong official site: robertdelong.com
The Green Door Store official site: thegreendoorstore.co.uk