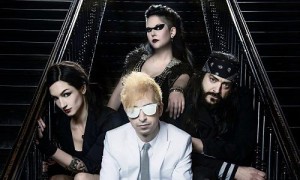 For those of you who haven’t heard of Mindless Self Indulgence, you missed out on a few very controversial years musically in the early noughties. One quarter of the band, namely Lyn-Z, is married to Gerard Way, whilst lead singer, Jimmy Urine, has gotten his crown jewels out live on stage. The no-holds-barred foursome seemed to fade into obscurity after the release of “If” in 2008, but have returned with a hip-hop influenced and, of course, profanity-ridden new album this year. “How I Learned to Stop Giving a Shit and Love Mindless Self Indulgence” is their first album in five years and…no, they haven’t matured one bit. In fact, the album seems jauntier, faster and even more lively than their previous releases, which is sure to make for a very unpredictable and energetic live performance.
The band actually created a Kickstarter in 2012, to fund the release of the album, vowing to hold the album ‘hostage’ until they received $150,000 from their dedicated fans. Consequently, they obtained $225,000, making their cause the second highest grossing music Kickstarter thus far. At least they’re frank about getting money off their fans!
Forget Miley, this band have thrived on controversy since 1997, and show no signs of stopping. They’re visiting Brighton during their UK tour this month, so make sure you gel your Mohawk and hide your sisters!
7:30pm to 11:00pm, Thursday November 28, £15 in advance, 14+
Keep up to date with the band: mindlessselfindulgence.com
Check upcoming events at Concorde2: concorde2.co.uk
Words by Shira Rossiter