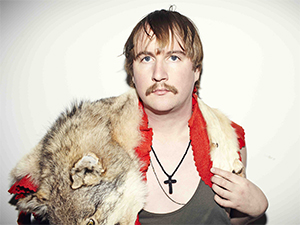 New York electronic veteran Machinedrum brings his masterfully eclectic productions and effect-heavy vocals to The Haunt, for one night only.
Since his early releases in the late nineties, Machinedrum has been setting, and re-setting the bar for electronic music. Spanning tripped out hip hop, glitchy IDM and skittering, jungle-influenced footwork, Travis Stewart has released a stream of albums mixing his eclectic tastes, garnering full marks from Resident Advisor and Pitchfork and attracting collaborators as disparate as Azealia Banks (who asked for his existing track ‘Fantastix’ as the beat for the title track of her ‘Fantasea’ mixtape) and producers Om Unit, Lone and Jimmy Edgar. His side-project with Praveen Sharma, Sepalcure, even saw a contribution to the soundtrack for Darren Aronofsky’s Black Swan movie. Despite this, there is very little of a standard Machinedrum formula to explain his success – while some recent releases take hysterically fast breakbeats to a level of gratuitous repetition, his current work draws more from hip hop, paring back Machinedrum’s one signature (frenetic, backwards and forwards beats) to a footwork-style accompaniment alongside largely half-time numbers “Body Touch” and “Gunshotta”, the latter of which is taking the internet by storm. And with a new LP on the way, half of whose tracks have already made tremendous waves, there’s only more to come from this producer-master.
Live, Machinedrum offers much more than the thrills of his DJ sets, taking to the microphone for the vast majority of the vocal parts and catchphrase-samples that cover his records, toning down the frantic pace into holistic, melodic songs. Add into the mix (literally) almost two decades worth of DJing experience and you have a seamless, fast-paced and dynamic blend of live sampling and sequencing to rival the greats. Which is easy when you’re Machinedrum – undeniably as great as they come.
Doors at 7pm, £8 in advance plus booking fee. Aged 14+.
Head to thehauntbrighton.co.uk for more info and to buy tickets, also available from Resident Records.
Words by Callum McLean
http://vimeo.com/39431140