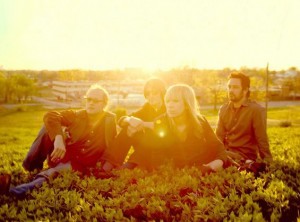 Following the release of fourth full length “Arrow” (2012), female-fronted four piece Heartless Bastards come to Green Door Store with a new line up and an uncut, live rock n roll sound that’s anything but heartless.
Latest album “Arrow” is the band’s first release on Partisan Records, and the first featuring their new line-up, with Erika Wennerstrom (vocals, guitar), Dave Colvin (drums) and Jesse Ebaugh (bass), joined by newcomer Mark Nathan on guitar.
Based in Austin, Texas, the band has previously featured on Jimmy Kimmel Live and at festivals such as SXSW. This year’s tour sees them set to play Untapped Festival in Houston, alongside live shows across Europe.
Heartless Bastards deliver a solid and diverse sound – think mid-90s rocked up indie, with occasional touches of Yeah Yeah Yeahs (“Marathon”). Other tracks are flecked with anarchic punk along the lines of Iggy Pop or Blondie (“Got to Have Rock n Roll”). Blues infused melodic indie track “Only for you” (free to download from theheartlessbastards.com) demonstrates Wennerstom’s impressive, high flying soprano vocal work, whilst “Parted Ways” is a bluesy indie track that disintegrates into a stunning and chaotic distortion powered mess.
With dynamic shifts in style from vintage flavoured punk to solidly melodic indie blues, these rock n roll veterans promise a great live set, and one to remember.
Starting at 7.30pm, £10 advance. Aged 18+. ZaZa Promotions.
Latest album “Arrow” out now
for more information and tickets visit theheartlessbastards.com
thegreendoorstore.co.uk
words by Sarah Rayner